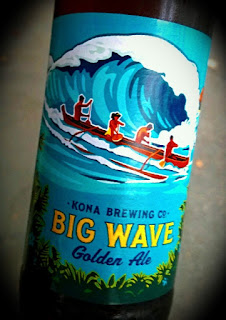 Started by father and son Cameron Healy and Spoon Khalsa, Kona Brewing Company is based on the western coast of the Big Island of Hawaii. A lot of people surf there, but even more drink beer. 1995 saw their first brew, Pacific Golden Ale, which is now known as Big Wave Golden Ale.

KBC brews their beer not just in Hawaii, but also in mainland locations that are close to their distribution centers. The water mineral levels at each brewery are adjusted to simulate the water used in Hawaii.

Sustainability is a watchword for the company, as they recycle everything from plastic cups to spent grain to air conditioner condensation. They also like to give back to the community and the world by supporting local interests like Bishop Museum and the Kokua Festival, and global ones like Sierra Club's Blue Water Campaign and Surfrider Organization.

Kona Brewing Company Big Wave Golden Ale is a light-bodied Ale with a golden hue that they say comes from caramel malt. The beer has a fresh, tropical nose with a hint of citrus and tastes smooth, with just a nod toward the Galaxy and Citra hops used in making it. It's very refreshing and goes great with chips and salsa or ahi poke. Or sausages, if you're in the mood. Alcohol is a low 4.4% abv, so you can have another one.