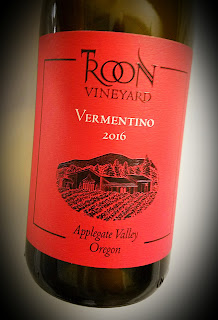 If Vermentino grapes were as commonplace in American vineyards as Chardonnay, maybe the ABC attitude -- Anything But Chardonnay -- would be ABV instead. They're not, though. And they probably won't be anytime soon. That's why I cherish them whenever I can.

Troon Vineyard's Craig Camp talks about two of their Vermentino wines, sounding like he's trying to choose his favorite child: "The 2016 Troon Red Label Vermentino, Applegate Valley is in the classic, richer, but still zesty style of Sardegna. The 2016 Troon Blue Label Vermentino, Cuvée Rolle, Applegate Valley was a co-ferment with 10% marsanne. It was named Cuvée Rolle (rolle is the name for vermentino in French) as the inspiration for this co-ferment comes from the richer rolle blends of the Languedoc in Southern France. As an interesting side note, there is actually more vermentino planted in France than in Italy." That should have them Rolle-ing in the aisles at the next tasting. The Red was fermented in steel tanks, while the Blue was done in oak barrels. Both were aged four months in neutral French oak.

Camp calls the red label Vermentino a "decidedly different" expression of the grape, "grown on the granitic soils of the Kubli Bench in Oregon’s Applegate Valley."

This wine is one of three different styles of Vermentino produced at Troon. They call it their "sitting on the Italian Beach" Vermentino, made from grapes grown in Troon's sustainably farmed vineyards in southern Oregon's Applegate Valley. They picked the grapes a little earlier for this bottling than for the Blue Vermentino, which was left to ripen longer. Alcohol hits only 12.5% abv and it retails for $15.

The Troon Vermentino is a light straw gold color and very clear in appearance. The nose is savory despite apple, lime, peach and tropical notes. There's a waxy, lanolin scent and some minerals, but the salinity is just what I always hope for in this grape. The mouthfeel is full, yet the acidity is racy. Sea salt tones color the apple-meets-lemon-lime fruit and an earthy element weaves its way through it all. That salty flavor stays around a good, long while, too. 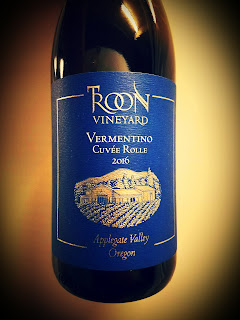 Don't over-chill your white wines. Troon's website pleads with you to refrain from refrigerating their Blue label Vermentino. They say a slight chill "emphasizes the wine's fruitier character," but a serving temperature in the mid-60 degree range "emphasizes the wine's savory qualities as well as its lightly tugging texture." They claim that, chilled, you're looking at notes of "yellow plum, papaya-with-a-squeeze-of-lime and guava." The slightly warmer expression "favors aromas of Spanish almonds and whispers of amontillado Sherry."

In old-country fashion, they tread the grapes by foot for this old-country varietal wine. It hits 12.5% abv and retails for $22.

The Troon Blue Label Vermentino looks so delicate in the glass. The pale color made me anticipate a light-hearted wine. It's a deception. The nose has notes similar to the Red Label, perhaps a little more savory - even yeasty. On the palate, the mouth is full and has great weight, while bringing a little more salinity to the show than the Red. Despite the almost creamy mouthfeel, the acidity is zippy and fresh.

The third Vermentino in Troon's line up, the Black Label, spends a year in barrel on the lees. The 2016 is expected to be bottled in the spring.