A Gin For Los Angeles 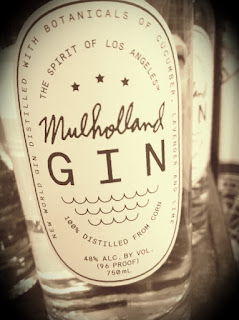 Mulholland Gin is called "The Spirit of L.A." on the label, and those who know about the history of Los Angeles are not surprised. William Mulholland built the aqueducts that allowed Southern California to siphon off Northern California's water.  There'd be no San Fernando Valley without him.

The label also says "In good times and bad, all will drink. If not water, then Mulholland." I'm for that, even though Mulholland Distilling is all the way over in Downey, not in the Valley. It's described as a new world gin made with botanicals of cucumber, lavender and lime. It's distilled from 100% GMO corn and hits Navy strength, at 48% abv, 96 proof.

Walton Goggins and Matthew Alper collaborated on this gin, as well as a vodka and a whiskey. Goggins is a familiar face, having acted in some fairly notable television series. Alper has spent time on the other end of the lens as a cameraman and photographer. His brother founded OTTIMINO Winery while his wife is in sales at Frog's Leap Winery.

The cucumbers in Mulholland Gin come across strongly, with lavender, juniper and vanilla notes right behind. It's a very aromatic gin, and has a flavor that’s refreshing on its own, although the alcohol level reaches up to about my limit. Still, it’s a great martini gin. I liked it better nice and clean instead of my usual dirty style. It may not be as thirst-quenching as water, but it's a damn sight more interesting.