"They Got This Recession On" Wines, Part 4 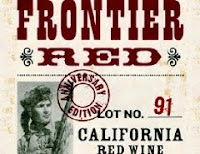 Fess Parker Frontier Red Lot 91 is the latest in a series of non-vintage wines from Fess Parker's respected Santa Barbara County winery.  Their website lists the wine at $12, but it sells at some places for $10, and I got a bottle from Los Angeles Wine Company for $8.

The wine is a blend of six Rhone varietals, and it really drinks like an actual Rhone Valley wine rather than a California facsimile.  The nose features blackberry and spices in a very dark setting.  An herbal quality seems to come through a layer of smoke.  On the palate, Frontier Red has a dark edge as well, with plenty of smoky fruit and a licorice component adding to the dark flavors.  I picked up a bit of graphite, too.  Frontier Red drank better each of the three nights it was open.

It's got a medium-mouthfeel, which is rather surprising considering the grapes involved.  I thought of it at first as "thin," but later I felt that might be a bit harsh, since the taste is so good.  I do prefer a bigger feel on my palate, though.  I would recommend giving it some time to settle down, either sitting in the glass or by decanting.

My wife used some of it in a spaghetti sauce she made, and the result was fabulous.  Naturally, the wine paired extremely well with that sauce.