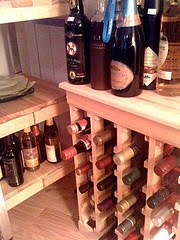 There were still a few bottles of holiday sparklers knocking around Wine Central, so I decided to pop one while watching Super Bowl XLIV.  It figured that as one of those "Geaux Saints" fans, I'd probably end the game crying into my beer, so I thought a little cheering into my sparkler would be nice in case it got out of hand before The Who performed.

This Gloria Ferrer Sonoma Brut is a 375ml bottle leftover from the holiday stretch.  I'm told if your holiday sparklers are still around in February, you're either very good at conserving or you're not drinking enough.  Either way, this one makes me happy the cork is popped.
A nose of rich, yeasty toast and malt greets me - a formidable nose.  It's a nose that makes its presence known.  Apple on the palate gets really creamy.  The wine has a huge mouthfeel, almost a beery sort of feel.  It is produced by methode Champenoise - "fermented in this bottle," as the label says.  I don't have any snack food to eat with it, but it feels so full in my mouth it's sort of a meal in itself.  A good meal.
Now, if the Saints can come back and win the Super Bowl, it will be just cause to pop the cork on another sparkler!
Variety:  85% Pinot Noir 15% Chardonnay
Appellation:  California > Sonoma County > Sonoma Valley
Vintage:  NV
Alcohol Level:  12.9%
Price:  $7 (half bottle)
Acquisition disclaimer:  Purchased by the author
Posted by Randy Fuller at 6:09 PM