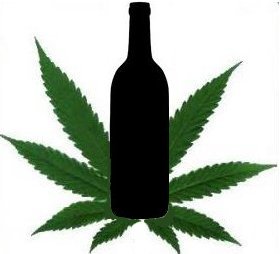 It has been an open secret for quite a while that some California winemakers like to make wine infused with marijuana - not for sale, of course, but for personal amusement among their close friends.

Michael Steinberger, writing in The Daily Beast,  blazed up the wine blogosphere recently when he wrote about one winemaker - nameless save for Steinberger’s nom de fumar, “Bud” - who regularly makes pot-juiced wine.  And you were worried about Pinot Noir producers slipping in a little Syrah on the sly.

What does cannabis wine taste like?  Don’t ask me - I guess I look too square to be offered a snort.  Steinberger said it was nothing to make you forget about Burgundy, and as for the smell, he says the sample he tried “had a pungent herbal aroma that called to mind a college dormitory on a Saturday night—that, or a Grateful Dead concert.”

The recipe is pretty simple: start fermenting some wine in a cask and drop in a pound of weed and wait nine months.  The alcohol extracts the THC from the herb.  Steinberger quotes Crane Carter, president of the Napa Valley Marijuana Growers: “pot wine delivers a quicker high than pot brownies, and the combination of alcohol and marijuana produces ‘an interesting little buzz.’”

The next time you’re stopping at tasting rooms in California wine country, keep an eye out for the telltale package of Oreos or Nutter Butters on the bar.  That may be a tip that there’s some homegrown brew to inquire about.