Wine Tasting Event: Don't Be Afraid Of The Noir 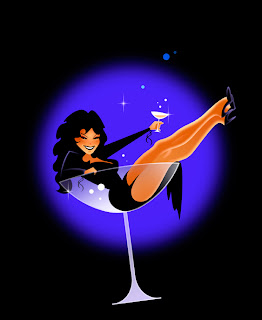 Wine lovers and film fans will converge for a Hollywood Pinot Noir tasting event to celebrate film noir.  Trailers From Hell, Now And Zin and K&L Wines are pouring the Pinot Noir in association with the American Cinematheque's 14th Annual Noir City Film Festival.  Check that link for a full schedule of the films to be featured.

Your hardworking Now And Zin correspondent has been invited to share in the hosting duties, which I have been led to believe involve standing around tasting wine and talking about it some.  That sounds like it’s right up my alley.  Some filmmakers have signed on for that gig as well, notably Dan Ireland, Chris Wilkinson, Adam Rifkin, Brian Trenchard-Smith and TFH chief guru Joe Dante.  Presumably, they were led to believe the job involves standing around tasting wine and talking about movies.

Here are the Pinots which will put us all in the noir mood, examined by our Film Noir Wine Critic, Robert Walter Parker-Neff:

"Black Ridge is made by ADS Wines, a red stained property in Lodi, owned and operated by the Scotto family.  They have been in the wine business since the 1940's, the heyday of film noir.  Come to think of it, it was the heyday of Lodi, too.  I'm going on the assumption that three generations of Scottos can't be wrong.  That's why they're still there.  The Pinot is soft and pretty, two things a man like me likes, especially when they arrive together.  It's also supple and juicy.  Things are looking up."

"In a rare moment of clarity, the Los Angeles Times made this one a Wine of the Week.  They say it's all about the grapes, and the grapes for this Pinot come from cool Central Coast sites in the Santa Maria Valley, Santa Barbara County, Santa Lucia Highlands, and Edna Valley.  That's a lot of ground to cover, but you get used to it selling door-to-door.  Aged in French oak barrels older than my suit, JackHammer brings the berries and spices forward with smooth tannins.  That's the way I like my tannins.  Smooth.  The Times calls it "delightful," which is odd because I'm used to hearing them break out the twenty-five cent words.  I'd pair it with a Mike Hammer movie, if you like that sort of thing."

"The grapes for this Pinot Noir come from Napa Cellars' southerly Napa Valley vineyard north of San Pablo Bay.  I used to live there, a little room over a garage.  I couldn't see the grapes from there, but I sure could see the ocean fog.  They say that makes for a long growing season.  You ask me, driving a forklift around a winery for chump change, that makes for a long growing season.  Once, the fog cleared out just enough so I thought I saw Robert Mitchum stomping some grapes to a pulp.  The wine is fruity and accessible, not a bit like Mitchum.  But then nobody is."

"This Pinot reminds me of a dame I used to know, drenched in pretty cherry and wild strawberry aromas, accented by hints of clove.  She worked at a farmers market.  The palate is juicy, with a core of red fruit that carries you through to a spice-kissed finish.  Is it getting warm in here, or do I just need a cold beer?"

"Ken Brown made this wine, so now you know why he's in that line of work.  He loves to talk about the cool Burgundian climate of beautiful San Luis Obispo, cool like an ocean breeze.  I think it's more like he's talking about himself, but then, I'm suspicious by nature.  Oh, yeah, the wine.  Full of ripe cherries, raspberries, you know the drill.  One thing I like about it - it's drinkable now with or without food.  Most of the characters I know get along the same way.  I'll take mine with a steak that thick.  But that's how I take my bourbon, too, when I can get it."