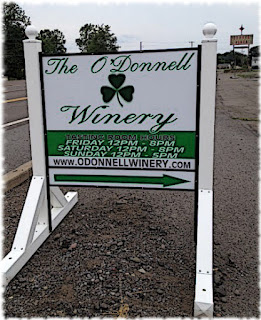 If you've ever thought, "Man, I'd love to own a vineyard and make my own wine," you have something in common with Norbert O'Donnell.  He's the owner and winemaker for O'Donnell Winery in northeast Pennsylvania. They have only been open a few weeks (as of mid-2012) but Norbert and his wife, Jeannie, are running full steam ahead.

Norbert is from the NEPA area, but he was bitten by the wine bug while living in Washington's Columbia Valley.  He grew to love the rich, voluptuous wines made there and found it a disappointment to return to his home state and the thin, sweet wines people seem to like there.  He says he wanted to turn around and go right back to Washington.

What he really did, though, is stay in Berwick, Pennsylvania and try to change the wine scene on his own.  O'Donnell's vineyard is still a year from first harvest, so he is sourcing grapes from Erie, PA for his first effort at a full scale release.  He currently has four wines in production, and made 1,000 liters each - about 110 cases for each wine.  That's quite a step up from the hundred he had been producing for personal use with grapes from California, Washington, Chile and Italy.

O'Donnell Winery is now one of 140 or so wineries in Pennsylvania.  The wine list shows two dry wines - his preference - and two sweet ones - the kind people like to buy in his area.  O'Donnell tells me sweet wines outsell dry by at least three to one in his part of the Keystone State.  He makes a dry Catawba, a Corot Noir, a Geisenheim and a concord.  The Corot Noir grape is a hybrid developed at Cornell University.  It's free of the "hybrid aromas" often found in North American grapes.  Geisenheim is a cross of Riesling and Chancellor grapes.

In his vineyard, O'Donnell watches over plantings of Chamboucin, Cameret (a Gewurztraminer clone) , Riesling and Merlot.  I hope to have a chance to taste his wines soon, and when I do I'll include O'Donnell Winery in the Now And Zin Wine Country series.