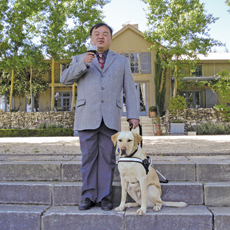 A small wine tasting event at Mignon Wine Bar in downtown Los Angeles packed a lot of punch.  There wasn't a very big turnout - I was the only taster during the final hour - but the few wines poured were top-notch.

Only three producers were represented, and the only winemaker on hand was New Zealand's C.P. Lin (left) of Mountford Winery in Waipara.  He had been in the U.S. for six weeks when I met him, visiting his wine buddies from coast to coast.  Lin is a Pinot Noir specialist, and he is blind.  I asked him if it was difficult making wine without the assistance of vision, a question I thought was pretty dumb when I heard myself ask it.

"Not really," said Lin.  "I do everything in the winery myself, cleaning the barrels, everything.  I do depend on my harvest crew quite a bit.  I used to even do the harvesting myself, when we were a very small producer.  Now we bring in a lot of grapes, so I need some help.  I also have an assistant winemaker who helps out a lot."

Lin's wines are delicious.  He makes a Liaison line which is produced from contract fruit.  He has a deal with his neighbors in which he gives vineyard management advice in return for grapes.  He does a great job with the fruit, but it's his estate line that really shines.  The Liaison Pinots are fresh and lively, but the Mountford estate wines show off the limestone terroir of his vineyard, something his neighbors don't have.

The Mountford Estate Pinot Noir 2009 shows the mineral-laden earth to its full extent, with a marvelous savory feel on both the nose and palate.  His estate wine "The Gradient" 2008 shows lots of minerals and fruit as well, and is a single vineyard Pinot.  Only three barrels were produced.

Lin also makes Chardonnay.  He loves the Chardonnay of Chablis and Meursault, so he emulates them.  He produces his Chardonnay with 100% malolactic fermentation, but still strikes a great balance between creaminess and acidity.  The minerals of his soil dominate the flavors.

Wes Hagen wasn't there to pour his Clos Pepe wines, but his distributor was.  Kevin Stuart of Infinity Imports poured me through the '09 Clos Pepe Estate Pinot Noir - a big, juicy nose and a mineral-driven palate - and the '10, which is showing riper fruit.

The Clos Pepe Chardonnay 2009 boasts a phenomenal smokey nose and great mineral freshness.  Stuart described it as a "non-Chardonnay drinker's Chardonnay."  Hagen has a side label which he uses for his personal diversions - the Axis Mundi offers something different each vintage.  The 2010 is a blend of Grenache and Syrah from Windmill Vineyard in the Santa Ynez Valley.  It looks like Pinot with its light coloring, but sends forth a huge expanse of ripe cherry and spiciness.  Still, it's a very restrained effort, especially considering the warmth of the region.

Knight's Bridge Winery - and sister labels Pont de Chevalier Winery and Huge Bear Winery - rounded out the event.  Jeff Ames makes the Knight's Bridge wines, and his West Block Chardonnay 2010 is a winner.  The warm block yields fruit with a nice tropical flavor, and the oak effect gives a pleasant buttery feel.  The Knight's Bridge '07 Estate Cabernet Sauvignon shows great dark fruit and graphite, while their '09 Dr. Crane Cab is a single vineyard effort that plays an herbal twist against the red and black fruit.

The Pont de Chevalier Sauvignon Blanc 2010 is fresh, grassy and tropical, while their '10 Chardonnay has a beautiful popcorn butter nose and a fruity palate that keeps the oak in check.  Winemaker Douglas Danielak did a nice job on these.

Huge Bear's winemaker Meredith Cahill-Marsland scores big with the Russian River Valley Pinot Noir 2010 - the first vintage of Pinot for the winery - and the '07 Napa Valley Cabernet Sauvignon, which displays a bright, fruity nose and a lean, mineral-driven palate with gentle tannins.

While I spoke with Kevin Stuart, he told me of a popup sausage event at Mignon which takes place every Saturday and Sunday from noon to 5:00 p.m.  Knackig features different kinds of German sausages, and Mignon has plenty of Riesling, Lemberger and pilsner to wash them down.