The winemaking community in Lodi is hard at work, slicing a piece of the California appellation pie for themselves.  Family-owned vineyards are the rule in Lodi, with generations upon generations of farmers working the dirt there.  They are getting out the message in every way possible that Lodi is a wine region of note, and Zinfandel is their calling card grape.

A new collective of Zinfandel producers - Lodi Native - has been formed.  The six winemakers have banded together to bottle some single-vineyard Zins under their collaborative banner.  Their mission is to accent Lodi’s heritage plantings – many of them dating back to the late 1800s – through sensible viticulture and minimalist winemaking practices.  Native yeast fermentation and use of no new oak help put the focus on Zinfandel’s terroir - on the taste of vineyards rather than varietal character or brand.

Lodi Native wines are available for purchase in six-bottle cases only, each consisting of all six different single-vineyard bottlings. 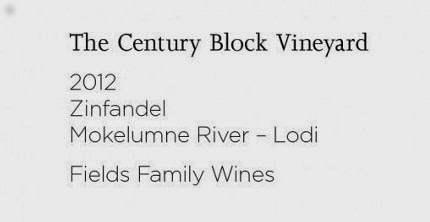 The six wines of Lodi Native were recently discussed in a virtual tasting event on Twitter.  Here is one of them, from Fields Family Winery.  Their 2012 Century Block Vineyard Zinfandel was produced by winemaker Ryan Sherman.

Just under 14% abv, this focused, fruit-driven Zinfandel is made from some very select grapes grown in Lodi's Mokelumne River AVA, east side.  The Century Block Vineyard is only three acres small, but it is planted in Zinfandel vines that have been there since 1905.  According to the Lodi Native website, this wine is the first in all that time to feature the vineyard's name on the label and "shows what maximum attention in the field and minimal intervention in the cellar can do."  Sherman feels the same way, as expressed on the Fields Family Winery website: "Our goal is to craft wines that showcase the vineyards from where they come and employ a minimalistic approach to winemaking."  Here, that goal is met.

This deep, red Zin smells of blackberry, plum and chocolate, and richly so.  The palate is lovely, with cherries, plums and a hint of raspberries.  Extremely fine tannins and bright acidity make for an absolutely delightful experience, with a finish that is lip-smackingly good -  the raspberry flavor lasts longest.  This red is great for ham, chicken or pork dishes - it would even hit it off with a grilled salmon or swordfish steak.