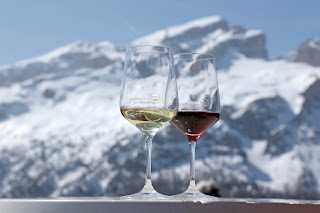 The Alto Adige region is located in the far northern reaches of Italy, just below Austria. Italian and German are spoken in the region, and it is not uncommon to find German words on the labels of the region’s wines.

You may know of Alto Adige by their white wines - aromatic, with wonderful minerality and acidity. Only sixty percent of the area’s wines are from white grapes, however. Pinot Grigio is the leading white grape, and they are probably a far sight better than the Pinot Grigio you may find in the grocery or on restaurant wine lists. Schiava is the most popular red grape, with Lagrein and Pinot Noir also showing well.

@thedailysip commented during the event that, "Alto Adige can be the #GoldilocksWine between the light wines of summer and dense bold wines of winter." @KMacWine tweeted, "@AltoAdigeWines can often be overlooked. That can have an upside: great value." That is one of my favorite tricks when looking for a great wine deal - an overlooked wine region.

The history of Kellerei Kaltern-Caldaro is described on their website as the result of two combined wineries.  "Today’s operation was formed by the 1992 merger of two long-established local cellars, the Bauernkellerei (Farmer’s Cellar) and the Jubiläumskellerei (Jubilee Cellar)." Both producers were established in the early 20th century.

Their historical sketch continues: "In 1919, after the First World War, Alto Adige became part of Italy. The subsequent outbreak of the Second World War radically transformed the region and its network of commercial relationships. It was only in the Fifties that Kaltern wines reasserted themselves as high-profile products for export markets."

The word Kalterersee on the label is German for Lake Kaltern. An Auslese wine, in German, means the grapes were picked as late harvest, although the botrytis that often comes with late picking does not generally dominate these wines. This one is certainly not a dessert wine. fermentation occurred on the skins for ten days, with malolactic fermentation to soften the mouthfeel and six months of aging on the lees - in contact with the spent yeast cells - which also adds to a full feel in the mouth. The aging took place in steel tanks as well as casks.

The Pharrhof Kelterersee is made from 95% Schiava and five percent Lagrein grapes, at 13% abv. @AltoAdigeWines pointed out that "the Schiava grape variety is native to Alto Adige," while @KMacWine tweeted, "Most people know the whites of Alto Adige but red wines like schiava and lagrein are a flavor trip!" From  @thedailysip: "The precision in this wine is like making the switch to HD TV for the first time."

The wine has a dark ruby hue, with almost no light admitted through it in the glass. Aromas are subtle and indicative of a cool vintage in a cool-climate region - raspberries and minerals with dark savory notes of black olives and roasted nuts. More fruit comes through on the palate, with strawberries lending some ripeness to the tart raspberry flavor. The level of acidity is a marvel and the ripest fruit is saved for the finish.

I liked the wine paired with a nice salami and a sharp cheddar. @AltoAdigeWines says, "Pair the 2014 Kaltern Caldaro Pfarrhof Kalterersee w/ light meats and mild cheeses." It makes a great apéritif, too.