A Good Night For Port 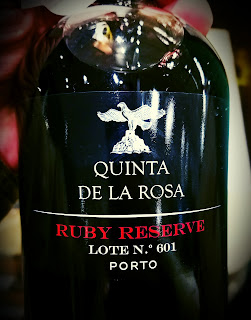 "It’s a good night for Port," my wife said.  The brutal Southern California winter had its teeth in us, with the overnight low expected to drop UNDER 60 DEGREES.  God help us, we have Port and will hopefully wake up tomorrow.  "Port weather" really doesn't happen in Los Angeles, so you have to jump in there when you get the slightest chance.

Quinta de la Rosa has been in the Bergqvist family since 1906, but they were Port shippers well before that.  The vineyards cover 55 hectares of the slopes above the Douro River, and winemaker Jorge Moreira works with grapes that have been foot trodden.

Of the many different styles of Port, ruby is the cheapest and most plentiful.  After fermentation, it is stored in concrete or stainless steel tanks, and usually blended from different years to match the house style.  Ruby is between two and five years old.  The folks at La Rosa say their Ports "tend to be slightly drier than the norm and are made from A class grapes."

The de la Rosa Ruby Reserve Lote No. 601 is dark ruby in color and smells of currant, laden with savory notes of leather and smoke.  It's a complex nose for what it considered the least complex Port.  Savory touches flourish on the palate, too.  However, the fruit flavors are bold and forward, while the acidity rips and the tannins exert their will, with little torches.