Bubbling Up From Down Under 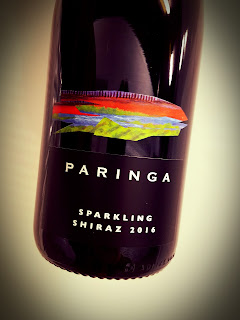 The Paringa website declares that the Hickinbotham family has been in the Australian wine biz for some eight decades.  The current generations are David and Dena Hickinbotham and their son, Alan.  The founder, Alan Robb Hickinbotham, is reportedly considered to be the father of professional winemaking education down under, for his work with Roseworthy Agricultural College in South Australia.

David Hickinbotham loves Australian Rules Football.  That makes him okay in my book.  I don't understand the rules, which are apparently a big part of the sport, but I love to watch the games, especially the officiating.  Those guys in the white smocks declare scores and infractions with such gusto.

Long ago, I was attracted to a woman from Australia and I asked her out to dinner.  At the restaurant, she revealed that her brother was an ARF referee.  For the rest of the evening, that's all I could talk about.  She finally said, "Look, why don't I give you HIS number?"  She never went out with me again.  She didn’t give me her brother's number, either.  But I still like Australian wines, especially really good ones.

My love of Australian sparkling Shiraz is similar. I am fascinated by it.  It's dark ruby, but it has bubbles.  At its best, it is a very complex wine that really sneaks up on the sipper.  For a winery that delivers value wines of quality, it's a great choice.  Alcohol is a reasonable 12.5% abv and the wine sells online for well below the $20 mark.

The Paringa Sparkling Shiraz 2016 is a dark wine with a big, grapey nose and a blast of leather and meat coming right behind.  It's an interesting combo, such a simple beginning that turns complex on a dime.  The palate is just as brash, with subdued bubbles, keen acidity and a dark, fruity taste.  Think Lambrusco, but bigger.  The earth profile hits late and stays on the finish.  It's fun, but it's serious, too.