"Sorry about the girl."  That's how the email started.  Paringa Wines' David Hickinbotham wrote me over the weekend after my article about his Sparkling Shiraz appeared on Now And Zin Friday.  I had mentioned how Australian Rules Football had turned a momentary attraction into disappointment.  He apparently understood how someone could have such a strong interest in the sport.  The girl is mostly forgotten, but I still like Australian Rules.  And sparkling Shiraz.

He explained that he has attended the Grand Final, the Australian Rules version of the Super Bowl, since 1971.  He's also been growing grapes that long, and making wine for export since 1999.  Hickinbotham is understandably proud of his Paringa and 3 Rings Barossa labels, with both having stirred positive comment from reviewers, including me.  He told me that he started Paringa at about the same time another winery, in Victoria, came up with the idea.  Both used a local landmark of the same name as their naming beacon, a town in his case and a road in the other's. 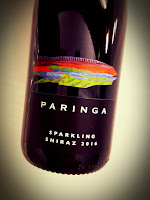 Hickinbotham told me that his family's connection with Australian Rules Football is his great grandfather Dave Hickinbotham, pictured from the Australian Football website, who played for Geelong.  That team has won nine Grand Finals since 1925, and his father, Alan, played a handful of games with them.  Alan was a successful businessman, a less successful politician and a well-remembered AFL player and, later, coach.  South Adelaide renamed their home field, Hickinbotham Oval, after him.

David has informed me that I should schedule a trip to Australia during the season, and he promises to take me to a game.  I hope it's at Hickinbotham Oval, and I hope we can bring in his sparkling Shiraz to the game.