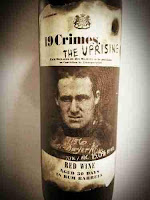 Some wine companies go to extreme lengths to create unusual back stories for their product.  We've seen wines marketed using dogs, cats, bears, birds, bicycles and UFOs as attention-getters.  Now, criminals get their turn on the label.

The 19 Crimes line features a variety of Australian juice bottled behind the faces of people who were reportedly sent from England to Australia during Queen Victoria’s reign as punishment for one of 19 criminal offenses.

Different labels have different criminals, who can talk and tell their stories if you download the free smartphone app and view their faces through it.  It's hokey-tech, in a way, but alarmingly captivating.


Liquor barrel aging is another trick being used to market wines into different consumer demographics.  Usually, the barrels in question formerly contained bourbon, but The Uprising employs old rum barrels, to good effect.

The winery describes the reason for rum in The Uprising: it “pays homage to Australia’s Rum Rebellion of 1808.  Due to the Government's hindering of the rum trade, citizens and soldiers banded together to overthrow them.”  Like a Boston Tea Party, with a bit more of a kick.

This Australian rum barrel treatment gives a softer effect than the bourbon barrels that are popularly used these days.  The nose gives off a light caramel note along with the usual dark fruit one expects from South East Australia.  I hear it's a blend of Shiraz, Cabernet Sauvignon and Grenache, but I've seen no official word of that.  Tasty, bold, great grip, acidity, tannins.  Perfect with a rosemary grilled steak.