The Beaujolais Nouveau Is Here, And It's Good 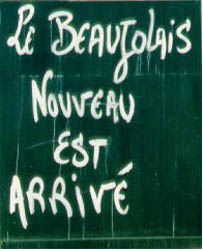 It's time again for the seasonal experience known as Beaujolais Nouveau.  The young wine that is produced and hurried to market each fall by France's Beaujolais region is here.  I'm not a fan of it, so I was quite surprised to find that it's pretty good this year.

Beaujolais Nouveau is released on the third Thursday of November at 12:01 a.m., a practice that was originated as a publicity stunt.  I've read accounts of the wine being rushed by any conveyance imaginable to the bistros across the land, each trying to get it there before their competitors.  The wine is generally touted as a great addition to both the Thanksgiving and Christmas feasts.  Its pairability with the wide variety of flavors available over the holidays is, for some, legendary.  I have never been able figure why, since the wine has none of the qualities we usually look for in a mature wine.

The leading producer of Beaujolais Nouveau is Les Vins Georges Duboeuf.  You've no doubt seen his name on those bottles with the fruity labels which appear each holiday season.  The company always puts out press releases extolling the virtues of the harvest.  The copy was pretty much the same this year, "nearly perfect summer," "exceptional harvest," "grapes of highest quality," "among the greatest vintages" they've ever had.  But this year the words rang true.

All three wines are made only from Gamay grapes, whole bunch harvested from the southern part of the region.  Duboeuf and his team reportedly tried some five-thousand samples over two weeks to settle on the cuvées found here.  Tough job, but someone's gotta do it.  The wines have a scale on the back label, much like Rieslings do, showing that they are somewhere between dry and medium-dry.  They hit 12.5% abv for alcohol and sells for less than $15.  The label art is quite nice this season, and is called "Foolish Pleasure" by Chloé Meyer.

The 2018 Duboeuf Beaujolais Nouveau is pretty good.  The nose - Gamay grapey - is nearly all dark fruit with a smattering of spice, and that profile holds true on the palate, too.  It's a clean, brisk drink that doesn't seem to fall prey to the usual complaint of being too young.  The spicy angle lends it maturity beyond its years, er, weeks.  Happy Thanksgiving. 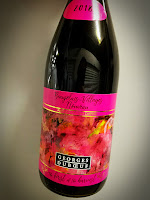 The 2018 Georges Duboeuf Beaujolais Nouveau Rosé is, not surprisingly, alive with vibrant fruit aromas and flavors.  The nose has herbs and strawberries in an earthier-than-Provence framework while the palate displays cherry, strawberry and a hint of the mayhaw jelly I enjoyed as a youngster in southeast Texas.  No kidding.  The acidity is gentle but tingly.  The pink wine will be great as an aperitif or with the turkey or the ham, and especially with those Black Friday leftovers.

The 2018 Duboeuf Beaujolais-Villages Nouveau  is 100% Gamay wine is considered a fuller-bodied beverage than the typical Beaujolais Nouveau.  There's more complexity in it due to the granite-and-schist-laden soils of the 38 villages.  They made 85,000 cases with an alcohol number of 13% abv.  It sells for $14.  The wine is medium-dark and smells earthy, full of minerals, almost like dirt with a rusty nail stuck in it.  Good earth, though.  The palate shows plums and dark berries with a hefty dose of those fabulous minerals.  Acidity is fresh but not overpowering, while the tannins are firm enough to handle a pork chop, if you like.  The finish stays awhile and is somewhat flinty.