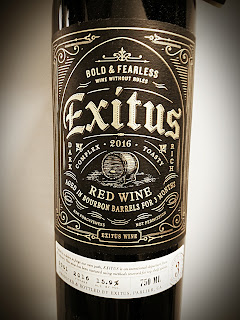 Bourbon is hot right now.  Meininger's reports that bourbon sales have tripled in the past two decades, and most of that growth has been in the premium and super-premium areas, the "can’t afford it" shelf.  Robert Joseph writes in the article about what he calls the bourbonization of wine, red wines aged in whiskey barrels that started hitting the store shelves about four years back.  It started as a boutique move, but now all the big producers are selling a wine that's been aged in whiskey barrels.

Bourbonized wine is usually high in alcohol - 15% or so - and marked by the rich caramel notes found in bourbon.  But some wine know-it-alls say, if you want bourbon, why don’t you just drink bourbon?  It could be that a new market segment is getting attention here, people who really like the effect of bourbon but can't, or don't want to, tolerate an 80-proof beverage.

I don't know why a wine company would name their product after the inevitable end of a terminal disease, but here we are: Exitus.  The say their bourbon-barrel aged juice is an "answer to the monotony of boring, forgettable wines," crafted for the "adventurous drinker."  They're right.

Exitus is made from a blend of Zinfandel, Petit Verdot, Cabernet Sauvignon, Petite Sirah and Merlot grapes which are vinified in stainless steel, then aged three months in bourbon barrels. It's really a wonderful idea, because there are those among us who believe three months of oak aging is plenty.  This wine hits high in alcohol, at 15.9% abv, and hails from Parlier, in California's Fresno County.  Fresno is in the heart of the Central Valley and is more known for raisins than wine grapes.

This red blend smells not too heavily of the Kentucky Bourbon barrels that are billed as the difference-maker.  The aroma is there, but ripe, deep red fruit claims center stage.  The aromatic notes of leather, vanilla, caramel and chocolate are noticeable, but they play supporting roles.  On the palate, there's a hint of bourbon, but it's not overplayed at all.  The wine is big - let’s not undersell it, it's huge - but it's a fun drink if you're into that trip.