A Hops Liqueur, Distilled In L.A. 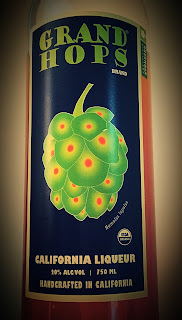 This bottle of Grand Hops California Liqueur was a Christmas gift from one of my more adventurous alcohol friends.  Marge is always willing to try a new grape, style or brew.  She doesn't always turn in a glowing review but, for those of us like her, it's not about finding a new favorite - it's about the search for one.

Grand Hops is made by Greenbar distillery, established in 2004, Greenbar was the first distillery to open its doors in Los Angeles since Prohibition.  They were on the leading edge of craft spirits then and, apparently, now.

What's in it?  I'm glad you asked.  Grand Hops contains molasses, aromatic and bittering hops, quillaja - a Brazilian flowering plant - and cane sugar.  The product is certified organic by the nonprofit Oregon Tilth, based in Corvallis, Oregon.  Alcohol hits a Port-like 20% abv.

This liqueur is unlike any I have ever had.  It smells extremely herbal - not unexpected since it is made from hops - and has aromas of pine, citrus and sour beer.  It is not a very pleasant nose, but not an off-putting one either.  Mathew calls it "funk... the good kind."  The palate brings grapefruit into a scenario reminiscent of Retsina, the Greek resin wine.  To call Grand Hops offbeat doesn't do justice to the drink or the word.  I am glad I had the chance to try it, but I don’t envision ever seeking it out again.  Maybe my opinion will change after I've had a chance to use it as an ingredient in a cocktail.

Update:  The Grand Hops label shows a recommended recipe using it with whiskey and simple syrup.  I had no whiskey in the house, so I used gin.  To sweeten it a tad I used Italian chestnut honey.  Pouring it tall with club soda (tonic water even sweeter) produced a cocktail that isn't going to make me forget about martinis, but was actually pretty good.