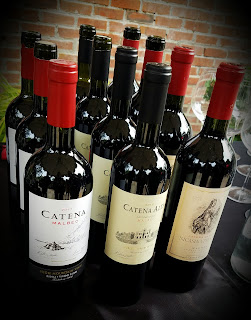 I am not often invited to the Consulate General of Argentina Residence in Los Angeles, so when I am, I try to amble over that way.  With pressed shirt, the "nice" shoes - the ones I don't wear for walking all the time - and hair arranged semi-neatly, I made the nine-minute drive east, to a street a little past Larchmont.

The occasion was a wine-tasting event and theatrical performance hosted by Argentine winemaker Laura Catena.  She brought her roadshow to L.A., "As Wine Flows By," a short original play which tells the tale of the Malbec grape through the perspectives of four women who embody different landmarks in the variety's history.  Catena commented that for years the wine world has been overloaded with Y-chromosomes.  "Men made the wine. Men wrote about the wine. Men collected the wine. It wasn't until the 1980s that women's contributions began to be noticed and acknowledged."  London actress Tina Baston worked wonders as the storyteller.

Laura Catena is a winemaker, medical doctor and all-around gracious woman who has labelled one of her wines with a visual representation of the Malbec story.  She also has a new book to push, Gold in the Vineyards, the story of her family's involvement in wine and a look at a dozen of the world’s most famous vineyards.

Catena uses four female figures on the label.  Eleanor of Aquitaine - one of the most powerful women of the Middle Ages - represents the birth of Malbec.  Madame Phylloxera personifies the near-death of the French wine industry in the late 1800s.  The Immigrant represents the pioneering women leaving Europe for a new continent.  Catena's sister Adrianna is the fourth, symbolizing the modern-day renaissance of Malbec in the new world.

The 2018 Catena Appellation Tupungato Chardonnay is an elegant white made from grapes grown on high mountain vines.  The barrel fermentation and nine months aging in French oak shows, with sweet oak spice and tropical citrus on the nose.  The palate is only slightly oaky and has a very pleasant earthy note. 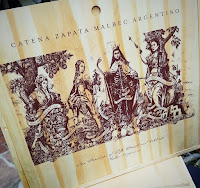 For the 2017 Catena Alta Chardonnay, the grapes came largely from the mineral-laden Adrianna Vineyard.  There is a bit more oak here - 14 months - but the fruit shines through and the wine is all the sweeter for it.

The 2017 Adrianna Vineyard White Bones Chardonnay bears the floral expression for which the vineyard is known.  The wine is earthier and leaner than the previous pair and reminiscent of Chablis.

The 2015 Nicolas Catena Zapata is a blend of Cabernet Sauvignon and Malbec.  It shows dark fruit and oak spice on the nose and is dark and brooding on the palate, a perfect match for steak.

The 2017 Malbec Argentino is a blend of two vineyards, Nicasia and Angélica.  The expansive nose is  fruity with white pepper and perfume along for the ride.  Easy tannins lead to a beautiful finish.

The 2015 Nicasia Vineyard Malbec is perfumed as well, and shows cherries on the nose and palate.  Firm tannins beg for a meat pairing.

You may know how hungry a person can get while tasting a half-dozen or so wines.  Fortunately, we were served food from the capable hands of Chef Ricardo Coghlan, executive chef at the Consulate of Argentina in Los Angeles.