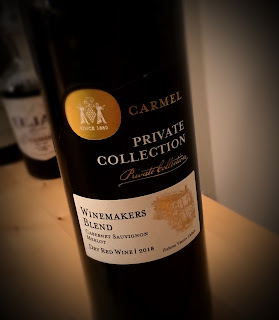 Carmel is Israel's largest wine producer, makers of about half of the wine from the country.  It was founded in 1882 by Baron Edmond de Rothschild, whom you may know as the owner of Château Lafite in Bordeaux.  Chief Carmel winemaker Yiftach Perets is listed on the label, along with his signature.  The wine is kosher and mevushal - flash-pasteurized.

The winery has released a trio of premium reds under the banner Private Collection, which recognize Israel's 137 years of modern winemaking.

The Carmel Private Collection Winemakers Blend 2018 is a 50/50 blend of Cabernet Sauvignon and Merlot. The wine aged for only eight months in French and American oak barrels, but the oak effect suggests more than the advertised time.  The label's Cabernet Sauvignon also saw eight months, but doesn’t smell or taste like it.  Their Shiraz is a wine I liked a lot, too.  The Winemakers Blend clicks 14% abv in alcohol and retails for $15.

This dark red wine has a nose of black cherry, blackberry and vanilla.  The palate shows its fruit forward, with dark berries layered over sweet oak spice.  It is not terribly complex, but it sips well enough and has firm enough tannins to pair with a ribeye steak or tri-tip.