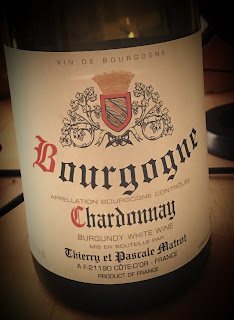 White wines are not just for summers and salads.  There are rich, full-bodied whites which are bold and warming.  They also pair beautifully with winter dishes - root vegetables, stews and herbs like fennel go particularly well with a nice, well balanced Chardonnay, for example.  I find that whites aged in oak serve me better in the winter than unoaked wines.  In fact, oak makes a white wine feels like Christmas to me.  I prefer an easy touch on the wood, however.

The Matrot estate is based in Meursault, not a bad place to have a field of grapevines.  The estate extends far beyond that region's borders.  The grapes for this wine were picked "near" Meursault.

Husband and wife Thierry and Pascale Matrot head up a family business which has been around for more than 100 years.  Their daughters, Adèle and Elsa, are the winemakers.  The younger ones are poised to take the reins someday, as Thierry did from his father, and his father from Grandpa Matrot generations before.

This wine was fermented in oak barrels, only a fifth of which were new.  There the wine aged on the lees, the spent yeast cells, for eleven months.  Aging "on the lees" gives a wine more heft and creaminess.  Full malolactic fermentation was also achieved, which further adds to the depth.  The wine is imported in the U.S. by Vineyard Brands.

The Matrot Chardonnay smells of tropical fruit, mainly lemon, lime and pineapple.  On the palate, citrus dominates, with great acidity and a creamy mouthfeel coexisting.  This is a great Chardonnay, vibrant and youthful, with zip enough for salads, seafoods and white meat.  The oak effect is possibly a little too much for me.  It comes across stronger than I expect in a Bourgogne blanc, but ouis not terribly overdone.