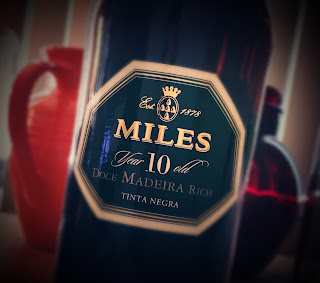 Madeira was the wine of choice for many of America's founding fathers.  John Hancock and the other representatives of the 13 colonies, it is said, toasted the signing of the Declaration of Independence with Madeira wine.  George Washington reportedly celebrated his inauguration as president of the young country with Madeira.  They say Thomas Jefferson toasted the Louisiana Purchase with the spirited wine.

Miles Madeira is part of the Blandy family's Madeira Wine Company, produced on the Portuguese island of Madeira since 1878, but before that, was known as Rutherford & Grant since 1814.  Madeira is made from the Tinta Negra grape, originally from Andalucia in the south of Spain and introduced to the island of Madeira during the 18th Century.  The Miles Madeiras are made in several different styles.

Vinified and fortified stainless steel tanks, this Madeira was aged in old American oak and naturally heated to mimic the process of shipboard transport.   Alcohol tips 19% abv and it sells for around $33.

The brownish-gold wine smells delightful, all raisiny and lemony and full of brown sugar.  The hearty palate shows the citrus beautifully and the acidity absolutely rips.  Pair with any kind of after-dinner eats, from chocolate to fruit to a cheese plate.  Or have it on its own, like the founding fathers did.