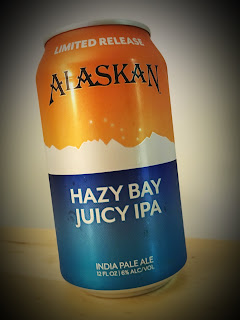 I am still waiting to find a wine from Alaska for the Now And Zin Wine Country series - one should be on the way - but in the meantime, a beer from the 49th state has appeared.  The sample was provided to me by the brewery.

Alaskan Brewing Company is unveiling a new limited release series of beers.  Their Hazy Bay Juicy IPA should be in stores in 25 states now, if they haven't been snapped up along with all the toilet paper and hand sanitizer.  The brewery describes their new creation as "a citrusy and tropical fruit explosion of hops and drinkability based on the New England Hazy IPA beer style."  They say the Limited Release series allows them to experiment with new styles and ingredients.

Hazy Bay Juicy IPA is brewed with hops such as Mosaic, Citra and Simcoe and Sultana, which all have juicy, citrus flavors.  The hops are heavily used in the dry-hopped stage with two dry-hopping additions during fermentation.  Alaskan-grown white wheat from the VanderWeele Farms in Palmer, Alaska gets credit for the soft mouthfeel.  Hazy Bay IPA is made from glacier-fed water and features Pale, Victory, Munich, and C-30 malts, brumalt, unmalted oats.  Alcohol tips 6% abv.

The Hazy Bay Juicy IPA pours up amber-orange and - as promised - hazy.  The hops are all there on the nose, piney and citrusy.  The palate is rich and smooth, with a touch of bitterness on the apricot flavor.  The aftertaste is golden and malty.  This is a great beer to keep in mind when the warm months roll in.  It'll go just fine with yard work.

ABC says they are looking at midsummer 2020 for the release of the new Fireweed Blonde, the next beer in their Limited Release series.  That one will be a little lighter in alcohol.  Another IPA is planned for autumn, Stratasphere, a Strata-hopped IPA.