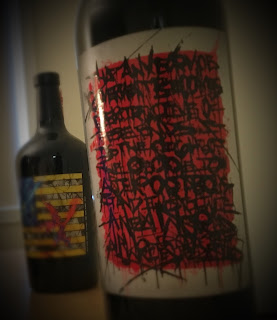 The 1849 Wine Company puts as much into their labels as their wine.  I am actually rather turned off by eye-catching labels, my knee-jerk reaction when I am hit with marketing techniques.  I must admit, though, that their label art is striking.

The wine company describes their fascination with the bottle as drawing "inspiration from the contemporary art movement of the 21st century."  The graphics are provided by Los Angeles street artist Saber, whose work is as political as it is attention-getting.

I'm glad you asked.  The winery boasts that they pride themselves on "creating California wines of the highest quality and expression," while championing the artistic endeavor.  I found, after tearing my eyes away from the label and sampling the juice, that they have met their goal.

Declaration, their 2014 Napa Valley Cabernet Sauvignon, was blended in St. Helena from "Napa Valley vineyards," although the company does not publish much information about the wine.

Declaration was aged in barrels made from French, Hungarian and American oak, 30% of which was new while 70% was previously used.  Alcohol checks in at a lofty 15% abv and the retail price is up there as well, at $80. 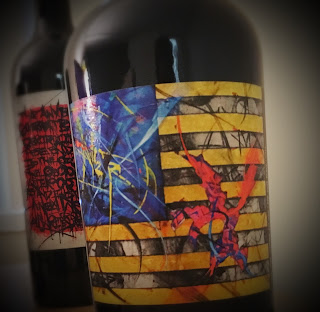 This dark wine has a gorgeous nose - blackberry, cherry, lavender, graphite, vanilla and sweet oak spices laid out with great care.  The palate is a delightful playground of dark berries and that Napa dirt, which doesn't seem all that dirty, really.  It still drinks fairly fruity and young, but has plenty of aging potential for the coming years.  After it sits awhile, you'll get a nice waft of smoke as you inhale on the sip.

1849 also makes a Sonoma County red blend.  The 2017 Triumph also has artwork by Saber and also hits 15% abv.  This one is a little easier on the wallet at $45.  It is a Bordeaux-style blend, presumably of Cabernet Sauvignon, Merlot, Petit Verdot.  There may be some Malbec and Cab Franc in there, but I couldn't say for sure.  The winery isn't very good at putting together a tech sheet.

Triumph's nose has some mild funk on it, with touches of campfire and earth.  The palate is youthful and fruity with a firm set of tannins and a fresh acidity.  The flavor profile does open up after a few minutes in the glass, revealing notes of beef jerky, black olives and forest floor.  It's an interesting wine which becomes more complex as it gets air.