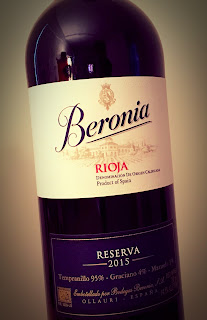 La Rioja, in northern Spain, is the oldest Denomination of Origin in the country.  It is also the coldest region in Spain, with an average high temperature of 68 degrees F.  The Ebro River Valley, surrounding mountains, cool climate - the arrow signs all say "Great Wine Region This Way."  Follow the signs.

It was Spanish wine that started my own interest in the broad spectrum of vino.  The juice of Rioja dragged a self-described "beer-only" guy into the wide world of wine after attending a tasting of Spanish wine on a lark.  I think about that tasting every time I have a glass of Rioja.

The Beronia Reserva 2015 is composed of three grapes - 95% Tempranillo, 4% Graciano and 1% Mazuelo.  Aging happened over a minimum of three years, in oak and the bottle.  Alcohol kicks in at 14.5% abv and the wine sells for about $20.

This very dark wine has such a rich nose it's almost enough just to smell it.  Almost.  Aromas of black currant and blueberries are colored up nicely by all the oak.  Clove and tobacco notes are sweet and - incredibly - not overpowering.  The palate is brawny and full of dark fruit.  It's loaded with minerals and acidity and firm tannins - just waiting for an unsuspecting ribeye to come along.