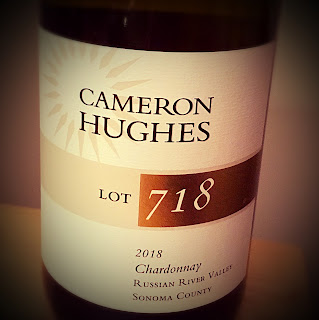 As usual, Hughes is tight-lipped about where this wine was grown and made, except to say that it came from "one of the region's storied estates, with almost a century of family history."  He goes on to praise the region, citing the Russian River Valley's cool ocean breezes and fog, which help the grapes mature well. "Anchored by a rare type of soil formed by an ancient sandstone seabed," he says, "there's just no place quite like it."  Hughes says Lot 718 is a "classic Russian River Valley Chard," only it sells for a mere $18.  Alcohol sits at 13.5% abv.

This Chardonnay is fairly lean, by old California standards.  There is a touch of oak on the nose, but the citrus and stone fruit stay in the spotlight.  The palate shows a bit more oak, but it does not overpower the profile.  Acidity is bright enough to make me order oysters on the half shell for takeout tonight.  The finish is long and vibrant, with pears and tangerine persisting.