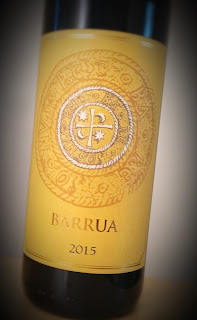 Today's wine comes from the Italian isle of Sardinia.  The 2015 Barrua Isola Dei Nuraghi  is made mainly from the Carignano grape (85%) with splashes of Cabernet Sauvignon and Merlot thrown into the mix.  The grapes were grown on Sardinia's southwest corner, in the Sulcis and Iglesiente regions, the Barrua and Narcao vineyards.  Alcohol is a lofty 15% abv and the wine sells in the $40 range.  It is imported in the U.S. by Kobrand.

Carignano, is known in its native Spain as Carignane, a grape which the winery identifies as being known for its elegant and velvety tannins.  The 2015 vintage was reportedly a good season - there were only a few days of rain in late September which had no effect on the grapes.

This Sardinian wine is extremely dark and smells of tart, red fruit and a strong herbal accent.  It really has a wonderful nose.  The palate comes on a bit riper, but not much.  The acidity is quite fresh and racy, while the tannins are firm enough, but do not get in the way.  Pair this wine with salami.