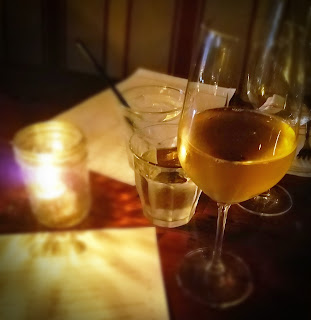 I'm disgusted with myself that it took me so long to get to Sotto in Los Angeles.  It's 15, 20 minutes from my home, right down Pico.  No excuses.  I should really get out more, and when I do, I should go back to Sotto.

Italian food from a chef who knows Italian food, with Italian wines to match.  Steve Samson owns the joint, and the food is fantastic.  The pizza crust nearly brought my wife to tears; the pork meatballs did it to me.

It's the wine I'm here to blather on and on about, though.  Wine Director Jeremy Parzen brings his knowledge of Italian wine to bear on what people are calling one of the most interesting wine lists in L.A.  Parzen, like me, writes about wine.  Unlike me, zillions of people read his blog - DoBianchi.com.  It's one of the more widely read wine sites on the web, and one of the better ones, too.  Parzen is a wine genius, I know because I read him.  He may be an actual genius, too.  I don't know, but it wouldn't surprise me.  Because of his involvement in Sotto, my expectations of the wines were high.

The 2016 Cirelli Trebbiano d'Abruzzo is $12 by the glass at Sotto.  Abruzzo is an Italian region, east of Rome, between the Adriatic Sea and behind the rain shade of the Apennine Mountains.  The Agricola Cirelli farm is organic, downright biodynamic with such attention given to the interaction of animals with the vines.

My wife says she gets pork drippings and honey on the nose, the pork a memory from her childhood in an Italian household in Pennsylvania.  She also likes the savory, herbal flavors.  I get a nose full of wet rocks, the seashore and a slightly smoky note that seems almost shy.  The palate shows a grand salinity and stone fruit, dry as a bone.

Denise had a Sicilian wine, probably because we’ve never been let down by one.  This one was the Biondi Etna Bianco Outis, at $18 by the glass.  It's made from the indigenous Carricante grape, in the Etna Bianco region.  The area covers the foothills of the Etna volcano, both north and south sides, and the Biondi grapes grow in the south.  The Carricante is blended with other local white varieties, like Moscadella dell'Etna, Minella, Malvasia and Catarrato.  The wine got about eight months aging in stainless steel.  We both loved the ocean on the nose and the volcanic rock on the palate.