A Grape Lesson From A Corsican Rosé 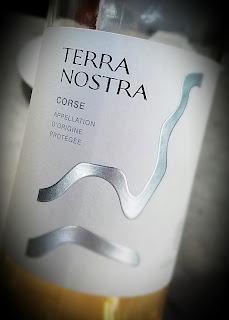 The wine list at L.A.'s Terroni isn't expansive, but it is most certainly Italian, and always offers at least a few wines which will make a grape freak sit up and take notice.  I have also found this rosé at Monsieur Marcel in the Farmers Market, and they are the only times I remember seeing the Sciaccarello grape on a wine list.

The Terra Nostra Rosé Corse is a Corsican wine, made from Sciaccarello grapes, also known as Mammolo.  It's an Italian red grape variety, grown on a French island which is closer to Italy than France.  In fact, it's just a stone's throw from the Italian island of Sardegna.  The people of Corsica say they think of themselves first as Corsicans, then as French.

It costs about 12 bucks by the glass in a restaurant, so I would imagine it runs just about that by the bottle in retail.  It's not too fancy, but it is tasty and refreshing.