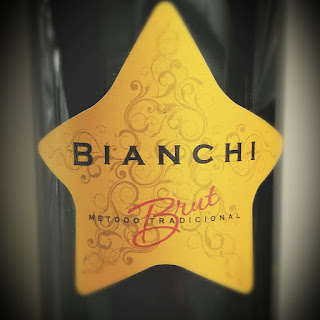 Why does sparkling wine always seem better after it's gone flat?  Is it just me, or do the festive bubbles seem to get in the way of the aromas and flavors?  I like a sparkler when it's been open for a day and has just a bit of frizzante left to it.  It seems then more like a real wine.  It also seems to allow the wine's full complexity to surface and be savored.  That's how it was with the Valentin Bianchi Brut.

This Argentine wine was made in the traditional method, Champenoise, meaning it got a second fermentation in the bottle.  It was aged for a year in the bottle with the spent yeast cells, a method called sur lie, which imparts more weight and creaminess to a wine.

This is one complex sparkler.  I have been taken aback in the past by several South American Chardonnays, which sometimes have led me to think of Champagne.  Bianchi Brut comes on with some Meyer lemon and tangerine, which is quickly greeted by a toasty note, then squeezed aside by a smokey aspect.  There's a lot going on in there.  The palate is simply delicious, with savory overtones on the fruit flavors.  Acidity zips right along, but doesn't make a nuisance of itself.  Pair away with, you know, anything - it's a bubbly - but I'm just going to sip this until it's gone.

There have been some news accounts lately that the current inflation problem in Argentina may cause the great South American values from that country to dry up, while a British importer of Argentine wine says "the market is finally catching up with reality."

The importer is quoted in thedrinksbusiness.com as saying that he feels Argentine wine producers should survive relatively unscathed, but the potential for difficulties in other areas persist.  “Strike action and domestic unrest are a very real possibility and logistics in Argentina are a constant headache," he notes.

All that will be determined in time, but there are still great values from Argentina.

Inky dark, the wine gives a nose which places vanilla notes up against currant and red berries.  The palate shows toasty oak spices draped across the bright fruit and acidity.  Tannins are smooth, but not silky, and a hint of eucalyptus drifts by on the finish.  A delightful sense of minerals is present from the beginning to the end.

Felipe Rutini was hired by the Argentine government in 1885 to develop public parks in Mendoza. It didn't take him long to recognize the potential for winemaking in the region, and his family established themselves as winemakers, owning property there for over a century.  In 1994, ownership was transferred and winemaker Mariano Di Paola  has been overseeing the winemaking since then.  In 2008, a winery was opened in Tupungato, in the Uco Valley.

There are hundreds of acres planted to wine grapes now, only 21 miles away from the 21,5000 foot peak of Tupungato volcano, the world's tallest active volcano.  The minerality resulting from the location defines the terroir of the region.  A 25-degree swing in temperature between day and night produces the diurnal effect that makes it a great wine growing region.  Harvest starts at the end of January and ends in early May, making it one of the longest growing seasons in the world.

The Trumpeter brand from Rutini helped open the door for Argentine wine in the U.S., and when people talk about the great values found in Argentine wine these days, this is one that needs to be in that discussion.

Rutini's Trumpeter 2012 Malbec is crafted from 100% Malbec grapes and undergoes full malolactic fermentation, in which all the malic acid turns into lactic acid.  This produces a fuller, richer mouthfeel.  Oak aging is done over seven months in barrels which are 30% new American oak, 30% new French oak and 40% neutral American oak.

The Trumpeter Malbec is extremely dark in color while offering a nose full of sweet oak spice.  The oak shows up, but doesn't overstate its case.  Cinnamon, allspice, black pepper and open onto a seriously deep tar aroma that lies over the dark mixed berries.  The palate really over-delivers, considering this wine costs only $11.  Rich blackberry and currant flavors are set off by the American oak spice rack with the note of tar creeping on the finish.  The tannins are steak-worthy while the acidity makes me want a big, juicy one.  I think of a hearty beef stew for this wine, on a chilly winter day, watching a snowy college football game on TV.  Or, right now will do.

Rutini's Tupungato winery in Argentina's Uco Valley was Opened in 2008, well over a century after Felipe Rutini decided it would be a good idea to grow some grapes and make some Mendoza wine.  Hundreds of acres are planted to wine grapes now.

A scant 21 miles away is the 21,500 foot peak of Tupungato, the world's tallest active volcano.  The minerality resulting from the location defines the terroir of the region.  A 25-degree swing in temperature between day and night produces the effect that makes it a great wine growing region.  Harvest starts at the end of January and ends in early May, making it one of the longest growing seasons in the world.

In the Rutini Trumpeter Malbec-Syrah, those two grapes form a 50/50 split and come from Tupungato vineyards.  Aging took place in 40% new American oak, 40% new French oak and 20% used French oak barrels over seven months.  The wine underwent 100% malolactic fermentation, which lends a mellow and creamy mouthfeel to this wine.  Winemaker Mariano Di Paola has done a fine job of producing a wine that is interesting - even a bit challenging - despite being produced in quite large amounts.

The 2012 Rutini Trumpeter Malbec-Syrah is rich looking with a medium full body.  Soft vanilla notes on red berry aromas mark the nose, while hints of mocha, cinnamon and tobacco give some complexity.  The palate is a delight - it's an oaky one, but a delight nonetheless.  The use of new oak really shows in this wine, with the wood-induced flavors and aromas standing firmly in the forefront.  There is a huge savory angle to this red blend, which I love for pairing with meat.  The tannins are supple and the finish is fairly long.  I've had more complex Syrah blends, but not for $11.

Fridays were made for treats.  After a full week of doing what we do to try and stay two steps ahead of the bill collectors, we deserve a treat now and then.  I like wine treats - a glass of good wine in a spot that's perfect for the experience.

My most recent Friday wine was enjoyed at a relatively new addition to the stretch of Culver City's Washington Boulevard, just a bit west of La Cienega.  Sublime Food Lounge hasn't been open too long, but what a nice little spot!  The walls are actually sliding doors which open all the way, so the beautiful day spills right inside.  There are a couple of tables right on the sidewalk, too, but sitting indoors is very much like being on the sidewalk.  When traffic is heavy, sidewalking it isn't all that great, but during the afternoon, the great outdoors is a great place for lunch or a well-deserved Friday wine treat.  Even if it is the great urban outdoors.

Sublime's wine list is interesting. It's got whites on one side and reds on the flipside, with subdivisions to make it easy to choose a wine for the mood in which you find yourself.  On this day, I felt "crisp."  The list features plenty of boutique wines from all over the world.  On the white side of the page, I had a tough time finding a wine from California.  So I went with Argentina

St. Lucas wines come from the Barrancas region of Argentina's Mendoza Valley.  They appear to be imported by a company in the southern California town of Santa Fe Springs.

Their Torrontes is a 100% varietal wine fermented in stainless steel and registering 13% abv.

On the nose I get a floral component I like to call "honeysuckle," with a fairly intense pear juice aroma.  I'm tasting pears, too, with a nice zesty citrus component.  There are minerals and a very nice acidity in this wine, but it's not zesty enough to alter the full, round mouthfeel.
Posted by Randy Fuller at 3:43 PM No comments: