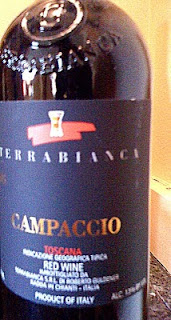 After a trip to the Santa Monica Farmers Market, we stopped in to a restaurant familiar to us from its fantastic Larchmont Village location.  La Bottega Marino in West Los Angeles also serves great Italian cooking.  If you're worried about authenticity, don't.  Their chef is from Naples.  My spaghetti Bolognese was so good that my wife - of Italian heritage - was tasting it from my plate.  Her meatball sandwich met with her approval and mine.  She took home half of it and I was the beneficiary of it later in the day.
The only complaint I have is that their by-the-glass wine list is a bit skimpy.  As a matter of fact, the Piemonte Barbera I ordered was out of stock.  The waiter offered me a Tuscan blend at the same price - nine dollars - and I gladly accepted.
Terrabianca Campaccio is a Tuscan blend of 70% Sangiovese and 30% Cabernet Sauvignon.  The winery is in the heart of Italy's Chianti Classico region, and the 12 clones of the two varieties were produced 40% in that region and 60% in Maremma.

Some soapy looking bubbles around the edge of the glass after pouring dissapated quickly.  The wine has a dark purple color waith an earthy blackberry scent and a trace of pencil lead.  The structure is quite nice.  Its dark, earthy aroma is borne out on the palate, too.  The fruit presents itself strongly in this brooding, full-bodied drink.

The Terrabianca paired very well with the bolognese, as if it had been made for it.  Oh, I suppose it probably was.  Great food and great wine are enough to make me want a return visit to La Bottega Marino.  Throw in some of that Billie Holiday they were playing during our lunch, and that return visit could be a reality by the time you read this.
Posted by Randy Fuller at 7:06 PM