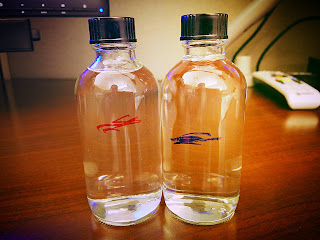 The New York Distilling Company says their spirits are "purposefully different." The Brooklyn-based distillery is run by "cocktail people making spirits for cocktails," Allen Katz, Bill Potter and Tom Potter. The latter also co-founded the Brooklyn Brewery.  The distillery makes ryes and gins that are distilled in Brooklyn from grains grown in New York State. I was ent tiny sample bottles of each for review.

Gin is perhaps the best use for juniper berries that there is. Originating in Great Britain in the Middle Ages, when they called it genever. The Dutch popularized gin as a medicinal product (for my rheumatizz) and today, whenever someone offers me a tonic for my soul, I say make it a gin and tonic.

The neutral grain spirit and botanicals are distilled together in a 1000-liter pot still, as in the 18th century. The botanicals include juniper berries, coriander seed, lemon and orange peel, whole green cardamom pods, cinnamon bark, elderberries and hibiscus petals.  The process takes seven hours to distill, and it's then left for a week before being slowly proofed in a column still to 44% abv over the course of two to three weeks.

The Dorothy Parker Gin has really herbal aromas - the juniper and coriander play large - and great traces of citrus on the sip. It's fantastic straight up, even better as a dirty martini.

Again, the neutral grain spirit and botanicals are distilled together in a big pot still. The list of botanicals is similar, including juniper berries, coriander seed, lemon, orange and grapefruit peel, whole green cardamom pods, cinnamon bark, angeleica root, whole star anise and wildflower honey.  The distillation process is the same, but it’s proofed higher, to 57% abv.  They say Perry's Tot gin is the first Navy Strength gin produced in the U.S. in 100 years.

The aromatics are much the same as the DP, except with more citrus notes and more firepower on the palate, to be sure. Navy strength means, in this case, 114 proof. It doesn't mess around. And it's exactly what you want in your G'n'T. They call theirs are "Tot & Tonic." If you really want to get crazy at your home bar, try their recipe for the "Innocenti." Stir over ice the Perry's Tot, a dry vermouth, Lillet Blanc and Benedictine and strain into a cocktail glass.