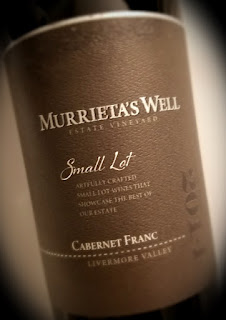 Murrieta's Well is a Wente property in California's Livermore Valley. They take great pride in being one of the Golden State's "original wine estates." The property was founded in the late 19th century, with cuttings from the Chateau d'Yquem and Chateau Margaux in France. The place was bought in 1933 by Ernest Wente. In 1990, Philip Wente and Sergio Traverso "partnered together to revive the winery." Winemaker Robbie Meyer does a great job of turning the fruit entrusted to him into magnificent wines that tell the story of the land.

A virtual event recently put Murrieta's Well into an online tasting session, which is documented here. My thanks to those involved in putting on the show for inviting me and providing samples to taste.

The wine is made from estate grapes grown in California's Livermore Valley, in the Sachau vineyard - 88% Cabernet Franc with a 6% splash each of Cabernet Sauvignon and Petit Verdot. Vinification was done in steel tanks, while the three parts were aged separately for ten months in French oak barrels. The vintage was marked by drought and the resulting lower yield from the vines produced small, concentrated grapes.

Twenty barrels of this wine was produced, and it's all sold out, according to their website. It carries its alcohol at 14.1% abv and the retail price was $58, when it was in stock.

The 2014 Murrieta's Well Livermore Valley Cabernet Franc is big, brawny, dark and deep. Inky indigo in appearance, the nose shows dark fruit and a tarry edge that carries tobacco and spice. Flavors run to the dark side as well, with blackberry and plums shrouded in forest floor. The structure is great, with firm tannins and juicy acidity.