A Good Zinfandel Is A Smoke 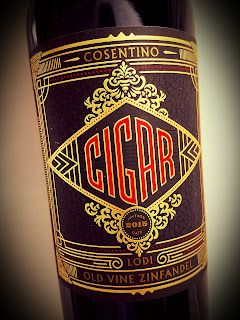 To paraphrase the end of a famous quote, "a good Cigar is a Zinfandel." The name for this Cosentino wine was taken from Winston Churchill's witticism promoting cigars and booze before, during and after meals. The winery's Napa Valley location should not warn you away from their longtime reliance on Lodi grapes.

he 2015 Cigar Old Vine Lodi Zinfandel has a big ol' California alcohol number at 15.5% abv and retails for $22. Winemaker Marty Peterson was wise to limit the oak aging to only eight months. It's just right.

Cigar is an extremely dark wine, marked by blackberry and blueberry fruit on the nose and palate. The aromas strike me as being a little muted at first, especially for a Zin. Some savory smoke and tar aromas open up as the wine does. As telegraphed by the name, the smell of cigar box also works into the profile. The flavors are dominated by bold fruit, but a touch of oak spice and black pepper wraps that up in a pretty bow. Tannins are firm and useful, if you happen to have a pork chop or a lamb shank laying around.