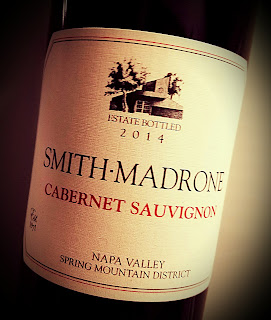 In St. Helena, 1,800 feet up Napa Valley's Spring Mountain, Charles and Stuart Smith started Smith-Madrone Winery more than four decades ago, when there was still room at the top in the "pioneer" field.  The outfit's name is a tip of the winemaker's hat to the Smith brothers, and to the madrone trees that populate the property.

The 2014 vintage was marked by a horribly dry winter - they got only half their usual rain - and an earthquake.  The 42-year-old, dry-farmed Cabernet Sauvignon vines held their own, though, and yielded an abundant crop.

It's all estate fruit from Napa's Spring Mountain District here, 85% Cabernet Sauvignon, 8% Cabernet Franc and 7% Merlot.  The wine spent 18 months in French oak barrels, 70% of which were new.  Alcohol hits only 13.9% abv, which is uncharacteristically low for a red California wine.  This wine retails for $52, a relative bargain in the world of Napa Cabs.  Nearly 2,000 cases were produced.

The medium-dark wine really has a powerful nose, or maybe I should say an "expressive" one, since elegance wins over power.  The dark fruit is draped in earth and minerals and some of the more lovely holiday spice and pencil-lead notes that I've run across lately.  On the palate, the fruit tastes "grown up" instead of candied - savory instead of sweet.  The tannic structure is firm yet fanciful, the mouthfeel flinty yet filigree.  The wine will pair wonderfully with a steak or a pork chop, but it's a great sipper, too.