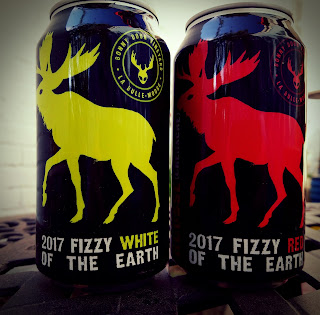 A fizzy, pink Bulle-Moose de Cigare is already on the loose from Bonny Doon Vineyard.  Now, two other canned quality wines join in because, as winemaker Randall Grahm says, “Yes We Can.”  Grahm is a noted trend bucker and setter in California wine, championing Rhône varieties, screw caps and honest labeling before anyone else did.  Wine in cans is his next frontier, although he's not the first to jump on that idea.

Bulle-Moose Blanche is a fizzy California Vermentino, canned for convenience.  Grahm says he also plans to make a still Vermentino in the near future.  The 2017 Fizzy White of the Earth was limited to just 800 cases of 375ml cans, which retail for $8 per can.

The White: It's 100% California Vermentino with a jolt of CO2 to get it slightly fizzy.  It's a 12% abv dry wine, which is best served cold and can age for a couple of years.

The Bulle-Moose Blanche tastes almost like Vermentino from the Italian islands.  It smells like one, too, with savory, salty aromas meeting the California citrus.  Think of it as the midpoint between Italian Vermentino and California Sauvignon Blanc.  The palate shows off a beautiful salinity - from Randall Grahm, no surprise - and zesty lemon and orange peel.  It's a refreshing wine that begs to be taken outdoors.

The Bulle-Moose Rousse is a fizzy Grenache wine in the convenient can.  The 2017 Fizzy Red of the Earth gets an introduction from the Le Cigare Volant UFOs-in-the-vineyard backstory.  Grahm says "no one is truly prepared for fizzy red wine from not around here."  Fortunately, these aliens are "known for their friendliness."  They're also good at picnics.

The Bulle-Moose Rousse pours up fun - you aren't drinking from the can, are you? - with pretty pink bubbles on top of the purple wine.  The color is actually more like medium ruby.  A nice frizzante stays after the bubbles dissipate.  The nose is deep and lean, with more earth than fruit there, and on the palate.  The savory notes for which Randall Grahm is known as present, even in an offering that’s made just for fun.