Would You Buy A Red Wine From This Man? 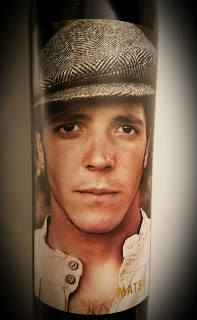 "Strength, nerve and courage" is on the label of the Matsu wines from Spain's Toro region.  Matsu means "wait" in Japanese, says the winery.  It's a tribute to "all the viticulturists who have been working in the vineyards for generations."   The label also features images of real life viticulturists, to a somewhat startling effect.

D.O. Toro has a dry climate, extreme temperatures and 100-year-old vines, and the 2016 vintage was longer than usual, offering a slow maturation for the grapes, which were harvested in October.

The 2016 Matsu El Picaro is made from Tinta de Toro - Tempranillo - grapes which grew on 50 to 70 year-old vines in poor soil, biodynamically farmed.  It was vinified and aged in concrete tanks, for at least three months.  Alcohol sits at 14.5% abv and the retail sticker says $14.

Extremely dark in color, this wine looks like motor oil and allows about as much light to come through it.  The fruit is dark and pure on the nose, but as savory as the D.O. Toro is dry.  Concrete tank aging leaves no oak impression, but the complexity does not suffer.  Savory notes grace the palate as well, with blackberry and prune coming forward on a dry-as-a-bone wave.  The tannins are firm and young still, and I would love to match this wine with roasted potatoes, or a juicy steak.