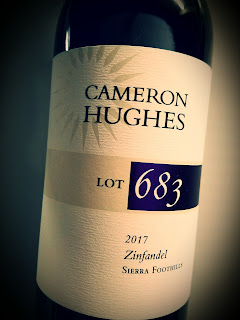 Hughes calls this one a hidden gem from a boutique producer in the Sierra Foothills, one of his "personal favorite" wine regions for finding good deals.  The AVA's history in wine dates back to California's Gold Rush days 170 years ago.  The hundred or so winemakers in the area are too small to get much notice from national distributors, which is where Hughes steps in.

He says the Lot 683 Zinfandel came from "a boutique winery on a ranch just off Hwy 49 ... at the crossroads of reasonable land costs, great wind/sun exposure, and prime drainage.  We hit the jackpot with this one."  The wine hits a lofty alcohol level of 15% abv and sells for only $12.

This wine is an excellent example of great Sierra Foothills Zinfandel.  Zinfandel wine flirts with being my favorite, if only more of them were as good as this.  Big red fruit on the nose is met by a full rack of herbs and spices - white pepper, sage, clove, cinnamon, nutmeg and more.  It's a Christmas cookie in a wine bottle.  The palate is a similar delight, with wonderful acidity and a long finish.