Sonoma Chardonnay At Half The Price 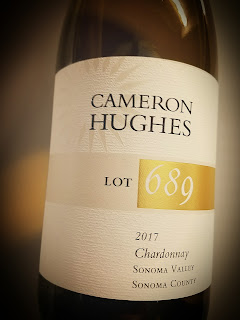 Hughes tells us that this wine was made by "a household name... an acclaimed winemaking team at an estate that has been prominently featured in just about every wine publication and constantly finds itself listed in one 'best of' list after another year after year."  It also gets 90+ ratings from said publications.  The Chardonnay was made from grapes grown in two single vineyard lots and aged in 40% new French oak.  Alcohol clicks in at a California-strong 14.5% abv and the wine, which normally sold for north of 30 bucks, now sells for $15 without its original name brand.

This Sonoma Chardonnay is like velvet.  The muted nose offers lemon and stone fruit notes with a soft touch of vanilla.  The palate is ripe and juicy, with an easy dose of oak and a nice bit of acidity.  Try pairing with the usual suspects: shrimp, oily fish or scallops, with some pasta.