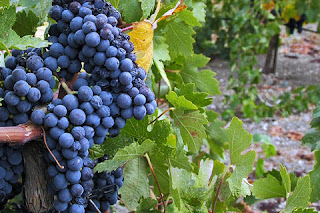 The world of wine now has five more grape varieties from which to choose.  Researchers at the University of California Davis have released three red and two white grape varieties.  Besides tasting great, reportedly, the vines are highly resistant to Pierce's disease.  That's a grapevine malady spread by the dreaded glassy-winged sharpshooter, which is said to cost California grape growers more than $100-million a year.  The new patent-pending grapes were traditionally bred over a span of about 20 years.

UC Davis geneticists crossed a grapevine species from the southwestern U.S. and northern Mexico back to Vitis vinifera over four to five generations.  Vitis arizonica carries a single dominant gene for resistance to Pierce's disease.

Ojai Winemaker Adam Tolmach planted four of the new varieties on an acre, the same plot of land where Pierce's disease wiped out his grapes in 1995.  He just had his first harvest and he says he's impressed.

The UC Davis researchers say interest in new varieties has been lukewarm so far, but they expect the new options to be examined more closely due to climate change.

UC Davis reports that Camminare Noir has characteristics of both Cabernet Sauvignon and Petite Sirah, the two vinifera grapes used in making the strain.

Paseante Noir is reportedly similar to Zinfandel.  That grape, along with Petite Sirah and Cabernet Sauvignon were used in the cross breeding.

Ambulo Blanc is similar to Sauvignon Blanc.  The variety is a cross of Cabernet Sauvignon, Carignane and Chardonnay.

Caminante Blanc has characteristics of Sauvignon Blanc and Chardonnay.  It's a cross of Cabernet Sauvignon, Chardonnay and Carignane.