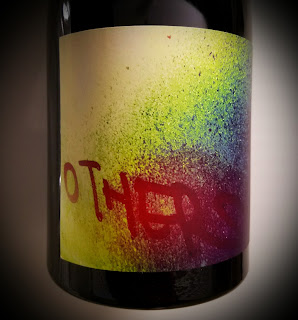 From the Cotes Catalanes region in southwest France's Languedoc-Roussillon, Others is a blend of Grenache, Carignan, Syrah and Mourvèdre.  It's made by Dave Phinney, who says he fell in love with the land around Maury on his first visit there.  He says the red soil is peppered with black schist, granite and limestone.  He not only fell in love with the dirt, but also the people.  So much so that he has a home there.  His Department 66 winery is also located there.

The 2015 wine is imported by Bloodlines of Sausalito, California, rings the bell in strength at 15.2% abv and sells for $25.

This deep, dark Grenache shows a bit of savory funk on the nose, with black olives, meat and tobacco coming through.  The palate has cherry and dark berry flavors, along with chalky, earthy notes.  The mouthfeel is full and refreshing, with enough tannic structure to handle a steak, or any other meat dish.  The finish lingers awhile, which is a pleasure.

The Pennautier château has reportedly been in the Lorgeril family since the time of Louis XIII, 1620 to be exact.  Nicolas and Miren de Lorgeril are the tenth generation to make wine there.  The estate is in the northern part of the Languedoc region, near the town of Carcassonne in the south of France.

Vin de pays means "country wine.”  These wines occupy a spot in the French wine classification system just above the table wine, but below the AOC level.  The classification allows vignerons to classify wines that were made using grape varieties other than those required by the AOC rules.  It keeps a winemaker from having his wine relegated to vins de table status.  There are six Vins de Pays regions in France, the largest being Vin de Pays d'Oc, which is in the Languedoc-Roussillon region.  Pennautier Viognier is grown and made.

The wine cost $8 by the glass at Santa Monica’s Pradeep on Montana, convenient to the Aero Theater.  It has an alcohol content of 13% abv.  The blurb on the menu promised a fragrant nose, which did not materialize for me.  It was served very cold and in a small, narrow glass - there just wasn't much there.  Plus, it is an Indian restaurant.  Conditions would have to be optimal for a wine's bouquet to overcome the atmosphere of spices.

On the palate, the Domaine Pennautier is lush and fresh with a touch of herbal notes mixing with the flavor of peach.  It's a good wine, and it paired nicely with the aloo gobi and its wonderful array of spices.