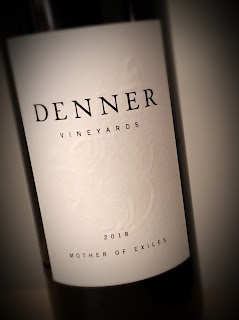 Denner Vineyards, in the Willow Creek District of Paso Robles, has been around for a couple of decades.  Ron Denner got the ball rolling in the late ‘90s, and is joined today by general manager Carol Rounsaville, winemaker Anthony Yount, assistant winemaker Alex Kemp and vineyard manager Aron Nevarez.

Located in the Templeton Gap and noted for its cool climate and dirt laced with limestone, the Willow Creek AVA is a favorite spot for those growing Rhône grapes.  Even so, Mother of Exiles is made of grapes which are more aligned with Bordeaux - 68% Cabernet Sauvignon, 22% Petit Verdot, 6% Merlot and 4% Cabernet Franc.  The wine was aged for nearly two years in French oak barrels, three-quarters of which were new.  Alcohol tips in at 14.4% abv and the retail price is $80, and it is available only to wine club members.

This dark wine - opaque, in fact - has a powerful nose.  It packs a perfumed aroma package consisting of dark fruit - like blackberries - and only a limited supply of the earthiness which I often find in a Paso Robles Cab.  There is a savory streak, to be sure, and it throws leather, tar and a pine forest into the nose.  The chalky aspect of the Paso dirt comes through on the palate, which is heavily influenced by the earth and the two years spent in barrels.

Posted by Randy Fuller at 6:26 AM No comments: