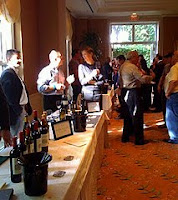 Here are my tasting notes from the Stars of Cabernet event held on November 5, 2009.


This tasting event was almost NBC - Nothin' But Cab. I did see a stray bottle of Chardonnay, but I'm not telling who brought that interloper into the house. This was a showing of big, bad, brawny red wines which wear their tannins on their sleeves, and wear them quite well, too.

There were 39 tables in the Peninsula Hotel's Verandah Room in Beverly Hills, each one sporting from one to four different wines the representatives were pouring. I did not have the time to visit with each winery, as I would have liked, but I was quite happy to talk with the representatives of the ones with which I could get some face time. Here are the wines I was able to sample, and my thoughts on each:

Fisher Vineyards - Great-grandpa Fisher was the guy who started the company which made GM's car bodies for generations. "Body by Fisher" was him. The carriage body business is remembered in the "Coach Insignia" Cabernet Sauvignon, Napa 2005. Blended with Cabernet Franc and Merlot, the wine is rich in nose and palate. It's a complex taste that embodies dark berries, chocolate and a spiciness underlying. Great finish. Fisher's Cabernet Sauvignon, Sonoma, Mountain Vineyard 2005 is much fruitier, with a fresh berry taste. As the name implies, the vineyard is on a steep hillside. The grapes seem to love the fact that it faces west and gets a lot of sun. The Wedding Vineyard 2005 is all Cab. This vineyard features four different soil types. The wine features Petit Verdot and Cabernet Franc as a blend. Flavor is abundant in this one, from olives to graphite to a sweet element that tries to hide but can't.

Santa Barbara County's Longoria was pouring only one, "Evidence," their Bordeaux blend of Cabernet Sauvignon, Cabernet Franc, Merlot and Malbec. A medium mouthfeel is joined by a brilliant flavor package of fresh, spicy berries. It didn't hit me like a full-blown Cab because the Cab Franc is an equal player in the mix while the Merlot comes in not far behind. The Malbec is a 4% partner. The lighter touch gives it a lot of versatility with pairing. The finish is fantastic. I had to stop myself from continuing to the next table while it subsided.

Miner Family Vineyards were represented well enough by their great "The Oracle." The 2005 vintage is branded "Napa Valley Red" due to the blend consisting of 56% Cabernet Sauvignon, 17% Cab Franc, 14% Merlot, 7% Malbec and 6% Petit Verdot. Blackberries are up front, but there's a host of other flavors - coffee, spices, some black cherry and a cedar quality that is irresistable.

Peju brought only one wine, and it was a brand new one - I'm sure that Lisa Peju told me it hasn't been released yet. A blend with Merlot and Petit Verdot, the wine is quite smooth and really shows its 18 months in French and American oak. Spices come through on the nose and palate and the taste is plummy with a hint of hot chocolate.

Pine Ridge Vineyards was pouring three Cabs. Their Stags Leap District Cabernet Sauvignon 2005 blends Petit Verdot and Merlot. The nose is full of cherry, smoke and chocolate while the palate shows an almost spicy cassis side. It's a very distinctive and seductive wine. I'd like to have some for the holidays.

The guys from Poem Cellars were eager to show off their two Cabs, "Marriage" from 2006 and "Tastevin" from 2005. Both seemed influenced by their 22 months in French oak more than most wines on display here. Not that it's a bad thing, mind you. They both displayed a dark earthiness I found very appealing. "Tastevin" had a particularly expressive nose.

Silverado Vineyards brought a trio with them. The Napa 2005 Cab is 87% Cabernet Sauvignon and the rest Merlot, Petit Verdot, and Cabernet Franc. It had a dark side - black cherries, blackberries, earth - that hit me in the right spot. The "SOLO" Stags Leap District 2005 is all Cabernet Sauvignon and very dark itself, with a layer of anise to go with the cassis and chocolate. Their Limited Reserve 2005 brought out the big tannins. Grab a steak and have at it. The Cabernet Sauvignon is joined by equal small parts Merlot, Cab Franc and Petit Verdot.

Star Lane Vineyard is in that little place in Happy Canyon where a hot-weather grape like Cabernet Sauvignon can thrive while it's all Chardonnay and Pinot Noir around it. The 2005 "Astral" has a dark and earthy smell to it, and the taste follows that lead, with a flavor I can only think of as tobacco leaf that really jumps out at me. It's a creamy wine that's silky smooth on the toungue.

Trefethen Family Vineyards' Estate Cab 2005 smells of cherry cola and tastes of a chocolatey jam. What really knocked my socks off was their HaLo 2004. With bay leaf on the nose and clove and nutmeg in the flavor profile, this wine had me thinking of Christmas even though I knew it was about 80 degrees right outside the door. Well, in Beverly Hills it probably will be 80 degrees on Christmas Day, but you know what I mean. This is a great choice for Christmas dinner - I think it would pair fabulously with turkey - but at $175 a bottle, this may be better as one of the gifts under the tree.

T-Vine Cellars showed one that I just had to taste before leaving. Their Napa Red "T" Blend 2006 is 85% Cab, 15% Primitivo. I'm a sucker for anything utilizing an Italian-style varietal. This one is rich with the flavor of Italian wine and could be a new favorite of mine.

This event was put on by LearnAboutWine.com, who sponsor a series of luxury tastings of this nature. In fact, you may want to know about their next one, the 7th annual Stars of Santa Barbara on January 27th, 2010 at the Peninsula Beverly Hills.

Disclaimer: I was admitted to the tasting at no charge as a member of the media.
Posted by Randy Fuller at 10:27 AM