Whole Foods Market Debuts A New Vintage For One Wine 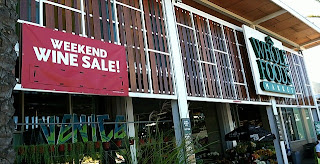 The One Wine label started in 2011 as a partnership with two wineries in Santa Barbara County, and has since blossomed into a mutually beneficial, creative and delectable partnership between Whole Foods Market and over ten of Southern California’s best winemakers.  All of the One Wine releases are small lot wines, typifying the movement of boutique wineries in Santa Barbara County.  They are all in limited supply, and only available in Southern California Whole Foods Market stores.  They have a habit of disappearing from the shelves quickly, so don't delay in picking up the ones that interest you.

I had the extraordinary opportunity to visit the Whole Foods Market in Venice, CA as they celebrated the five-year anniversary of that store.  The new One Wine releases were poured, with winemakers and representatives of the wineries that made them present to chat about the wines.  It was a three-hour drive down to L.A. for them, so their presence was much appreciated.

The event was headed up by Hilary Maler, the Southern Pacific Region Associate Marketing Coordinator for Whole Foods.  Joining her was Roger Fawcett, wine and spirits buyer for the region.  Fawcett was excited about the chain's involvement with the One Wine project.  “We are thrilled to partner with our neighboring vineyards to create regional, locally produced blends for our customers,” he said.  “Our One Wine label wines showcase the world-class winemaking taking place in the foothills and valleys that surround our community, and allow our shoppers the opportunity to uncork a range of Southern California’s best wines.”

You can get a taste of One Wine by viewing this mini-documentary.

Jim Saunders, of Hearst Ranch Winery, conducted a blind blending session to determine the mix for his One Wine Red Blend.  It turned out that the Whole Foods Market team, led by Priscilla Vazquez, made a more popular blend than that of the winery staff.  Saunders took it in stride and signed off on it, saying, “We get to showcase a lot of different wines in one bottle.”

He certainly does.  The blend is 85% Cabernet Sauvignon, 10% Malbec, 3% Petit Verdot and 2% Petite Sirah.  The expressive nose shows big fruit - black cherry and raspberry - with a touch of mocha.  Blackberry and currant flavors dominate a palate which is both elegant and powerful.  The tannins make themselves known in this muscular wine, and the alcohol stands at 14.1% abv.  Saunders says, “We use different shades of oak for the different varieties in the blend.  We love it.  We made less than 500 cases, so it probably won’t last too long on the shelves.”

Gray Hartley is one half of the winemaking team at Hitching Post Winery.  He and Frank Ostini make some fairly legendary Pinot Noir, and are also doing some nice things with a grape Hartley calls a “Pinot Noir wannabe.”

The Valdiguié grape - VAL dee gee ay - was once known as Napa Gamay, due to its similarity to the grape of Beaujolais.  What it really bears a resemblance to is Pinot Noir.  The One Wine Hitching Post Red Blend is 51% Valdiguié, 42% Merlot and 7% Cabernet Franc, so the grape’s presence is easily noticed.  Hartley leans in and softens his already soft voice to explain how Valdiguié “acts as a conductor, tapping the baton and bringing the other elements of the wine together in symphony.  It brings out the best the other grapes have to offer.”

The wine is fermented and aged in neutral oak barrels and comes to an easy-drinking 13.8% abv.  The smoky, raspberry/floral nose and slightly tart palate immediately makes me think of a really bold Pinot Noir.
When Hartley told me how the One Wine experience has spurred sales of other Hitching Post wines, WFM’s Roger Fawcett jumped in.  "The One Wine project is a great way to showcase the region's winemakers, and the extra visibility helps move other wines in the wineries' own lines."  Hartley responded with an overly sincere, "You're in good hands with Whole Foods Market,” then the kicker: “Oh, that's an Allstate commercial!  Seriously, the friendships we've built with Whole Foods are close." 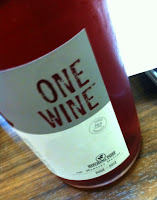 The pink side of Valdiguié is about as pink as it gets.  It’s deeply tinted - like the salmon Hartley caught in his earlier career as a fisherman.  The mix this time is 48% Valdiguié , 47% Grenache and 5% Pinot Noir.  Hartley says there’s isn’t a lot of Valdiguié available in California.  “I dare you to try and find some!  Ours comes from French Camp Vineyard in Paso Robles.”  It has a very modest 13.1% abv number and is released to Whole Foods for One Wine before they do their own Hitching Post version.

Showing the mark of a good rosé, the wine has great acidity.  Again, the presence of the Valdiguié comes through in the flavors that are as dark as the color.  Again, Hartley lifts his imaginary baton in explaining how the grape inspires the other fruit.  “All the grapes are co-fermented, half in steel and half in neutral oak.  The fermentation of Valdiguié is quite something to see.  It really roils in the barrel.  Puts on a show."

Doug Margerum was one of the original winemakers involved in the One Wine series, back when it was called A Collaboration.  He showed up on his birthday with no candles awaiting him, but he lit up like one when he started talking about his wines.

The One Wine Happy Canyon Merlot blends 75% Merlot, 20% Cabernet Sauvignon, 2% Malbec, 2% Cabernet Franc and 1% Petit Verdot.  Margerum says he used Bordelaise punchdowns to keep the grape skins in contact with the juice and sent the wine into small oak barriques for eleven months.  The Merlot was fermented in steel.  The wine offers a dusty, floral nose and is fresh in a way that is Margerum’s calling card.  Bright cherry flavor and great acidity are your reward for working the corkscrew.   This wine - as with all the One Wine selections - was subject to a blending panel.  Margerum admits that he cheated the process a bit to get the blend he wanted, but all’s well that ends this well.

Margerum’s white wine entry to the One Wine line is an inventive blend of Sauvignon Blanc, Chenin Blanc and Riesling.  "I wouldn't do it, but they can," Margerum says, with a nod toward the WFM crew.  "For them, all bets are off the table."  He likes more traditional blends, so something this riotous would not appear in his portfolio.  "I'd be more inclined to mix Sauvignon Blanc and Semillon."  The wine is very mineral driven, with pears and apples aplenty, but the minerals are really the story.  It's a delicious and interesting wine.  Quite refreshing, too.

Representing Clendenen Family Winery was Marissa Beverly.  She tasted me through the One Wine Italian Red Blend, made of 60% Nebbiolo and 40% Barbera grapes at only 13.5% abv.  The grapes come from Bien Nacido Vineyard, a very special plot of Santa Maria Valley land, in blocks planted especially for winemaker Jim Clendenen.  It's a non-vintage mix of mainly '05 and '06 wine.  The nose shows cherries and dark berries and hits the palate with great acidity and tart raspberry flavors. 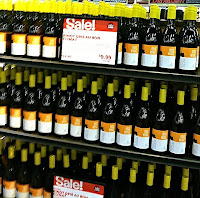 Clendenen's Pinot Gris is a 100% varietal wine made from grapes grown in the Sierra Madre Vineyard in the Santa Maria Valley.  The alcohol is quite restrained - just 12.3% abv - and the wine sees full malolactic fermentation, which converts the malic acid into lactic acid and gives a fuller mouthfeel.

Whole cluster pressed, the wine is fermented and aged six months in neutral oak.  The bouquet is full of fruit with a great mineral profile.  Soft, smoky fruit decorates the palate and there is just a touch of creamy oak on the finish.  Pair it with salmon, lobster or crabs and you'll be happy.