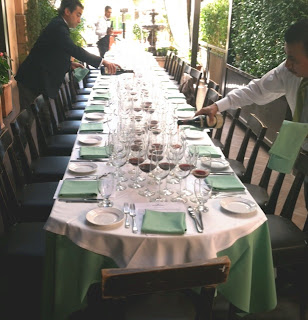 It was a good afternoon in Beverly Hills.  More than once, I heard that comment from attendees at a lunch and vertical tasting of Bertani Amarone at Via Alloro on November 1, 2013.  "Skip cleaning the apartment for a vertical tasting of Amarone?  Sure!  Oh, there's lunch, too?  Cool.  Where are we going next?"  Many thanks to Palm Bay International for staging this event and for inviting me to attend.

Winemaker and Bertani technical director Andrea Lonardi (pictured) presided over a tasting six Amarone vintages from the Bertani estate covering five decades: 2006, 1998, 1990, 1981, 1973, 1964.  Bertani holds back half of all production of their wines from each vintage, so each of these wines is currently available for sale in the US.  There were a few other Bertani wines included, too, as if the vertical wasn't enough. 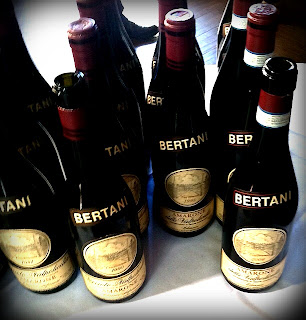 Lonardi studied in the south of France, worked in Argentina, Chile, Washington state and Sonoma before taking the job with Bertani.  I asked him where his dream vineyards would be: "Burgundy for Chardonnay, Bordeaux for Cabernet Franc and southern France for Grenache," he said.

Techniques have changed over past 50 years.  Lonardi says they used to harvest in October, but now do so in September due to climate change.  Their grapes get at least three months of drying time between harvest and crush.  They still dry grapes just like they did 50 years ago, on straw mats. 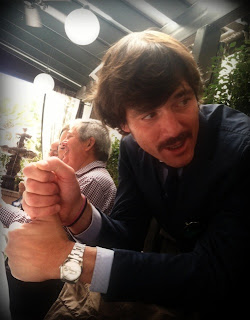 Bertani was founded in 1857 by two brothers.  They became négociants around Verona, then bought vineyards in Valpollicella and started growing their own.  The first of their wines brought to the US was labeled SECCO BERTONI to differentiate it from the sweet wines popular in that day.

Amarone's slight bitterness is delightful, and it's the reason for its name.  "Amaro" means "bitter" in Italian.  The style was first made when the cellar master forgot to stop fermentation on a sweet wine.  It came out dry, and it was good.  A tradition was born completely by accident.

Bertani's vineyards stretch out across all the wine producing areas of Verona, from Valpolicella to the Valpntena - the valley of the gods - to lakeside Bardolino to the easternmost hills of Soave.  The different soil types in these areas allow the winery to express a number of different terroirs in their wines. 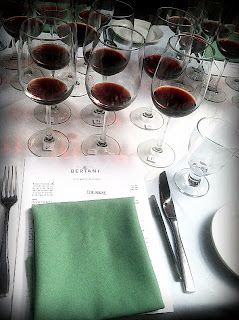 Overall, I found the alcohol and tannic structure became more noticeable as we drank through the years.  Fruit also comes more to the forefront in the younger vintages.  Lonardi's favorite is the '73.  I like 'em all, but the two oldest really fascinated me.  The prices are suggested retail.

1964 Amarone Classico  $450
Vintage report: The spring was wet, while the summer was dry, as were September and October.
This wine aged for 18 years in large Slavonian oak barrels and was bottle in the fall of 1983.  15% abv.
Brick, with a browning edge.  Lonardi commented, "The '64 is really outstanding today."  Elegant, with a nose of raisins, orange peel, coffee and caramel.  On the palate, the wine is very easy in the mouth.  The alcohol isn't even noticeable.  Spices and cherry fruit are subdued by iron-like minerals. 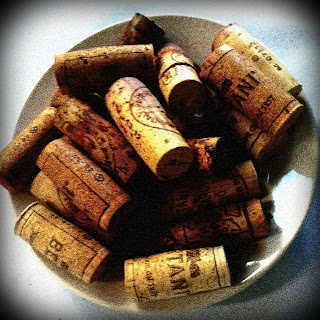 1973 Amarone Classico  $300
Vintage report: Ideal temperature and rainfall during spring and summer.
Aged nine years in large Slavonian oak barrels, this one was bottled in the spring of 1983.  15% abv.
Brick colored, browning at the rim.  The nose shows raisin and candied orange peel.   Again, elegant.  An easy feeling palate with big coffee notes and alcohol again not a factor.  More high mineral flavors. Absolutely no trace of alcohol on the palate, very easy to sip. 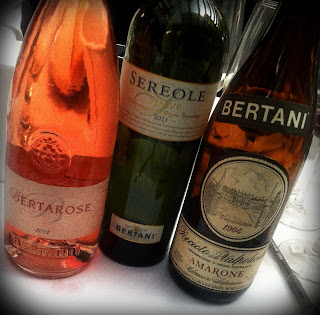 1990 Amarone Classico  $300
Vintage report: Ideal season.  Rain in the spring, warm, dry summer.
This vintage took six years aging in Slavonian oak and was bottled in the fall of 1999.  15% abv.
Ruby, with a brick edge.  Candy orange, cherry and baker's chocolate on the nose.  Big cherry notes, black tea and a hint of raisins on the palate.  Big fresh tannins are more noticeable, great acidity, grip on the finish.

1998 Amarone Classico  $190
Vintage report: Average temperatures and rainfall in the spring, hot in July, August and September.
This wine aged for six years in Slavonian oak and was bottled in the spring of 2005.
Deep ruby core, brick rim.  Aromas of raisin, cherry, tea and coffee grounds.  The palate features a brilliant acidity with bright cherry flavors and black tea on the finish.  Alcohol steps forward, great tannic structure.  Nice and dry. 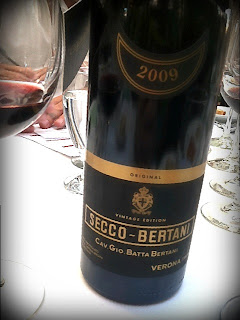 2006 Amarone Classico  $130
Vintage report: Normal rainfall during the spring and no rain in July.  Frequent light rain in the first half of August.
The wine aged for six years in oak and was bottled in the of winter 2012.  15.4% abv.
Ruby, just starting to brick at the rim.  It's all big, bright cherry on the nose with slight raisin notes and a touch of tea.  On the palate, fresh cherry, firm tannins and lively acidity make for a very vibrant wine. Notes of coffee and tea finish the pleasure.

The other Bertani wines included in the presentation: 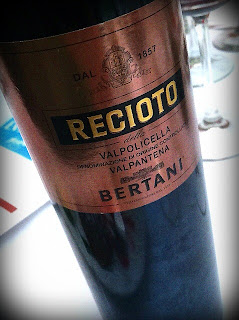 Original Vintage Edition 2009 $32 - A replication of the first Bertani wine produced in the 1800s.  It is made from 80% original Corvina clones (Rizza, Nera and Corvinone) with a 20% mix of Cabernet Sauvignon, Sangiovese and and Syrah.  Aged in chestnut and cherry wood, not oak.  First in cherry 2-5 months, then in chestnut to 18 months.  The nose shows spices and cherries with bright, fresh cherry flavors.  A touch of cinnamon and nutmeg are a delight.  Great acidity and tannic grip.

Villa Arvedi Amarone 2008 $60 - 70% Corvina Veronese and 30% Rondinella, the wine is produced in true Amarone style.  the grape bunches are harvested and taken to farmhouses where they are left to dry on straw mats for about four months.  This raisins the grapes and concentrates the natural sugars.  Aromas are highlighted by dark black cherry, with flavors of really savory cherry and huge tannins on the palate.  Great with the lamb shank.

Recionoto della Valpolicella Valpantena DOC $37 - 80% Corvina Veronese and 20% Rondinella, this dessert wine is produced Amarone-style and left to dry on straw mats for about five months, then slow fermented for about a month.  Aging takes place for 18 months in French oak barriques, half of them new.  It has a big, sweet nose of raisins and brown sugar and an even sweeter palate showing raisins, caramel and mocha.  It rocked the warm chocolate tart completely.