F Is For France 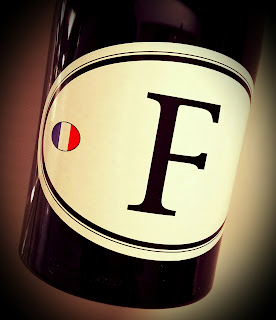 The Locations wines are an experiment of place for winemaker Dave Phinney, of Orin Swift fame. It's his attempt at making wine a country-wide effort. It resulted from a conversation he had with a French winemaker about what would happen if one were to simply break all the rules. Would something new arise? Would the wine world spin out of its orbit? Would people buy it?

At first, I wasn't on board with the philosophy of making wine generically. I felt specific locations are important because of what they are, where they are, why they are. I still feel that way. However, after sampling through a few letters, I'm on board with what Phinney is doing.

Yes, the letters. These wines are labeled only with a big letter or two, depicting the place of origin - E is for Espana, P for Portugal, I for Italy, TX for Texas. Yes, he sources grapes from Texas.

F is for France, and it's the fourth edition of the F series. The wine blends Grenache, Syrah, and assorted Bordeaux varietals into a heady - 15% abv - wine that comes on strong, then delivers. Ten months of barrel aging seems just about right for this letter.

F4 is dark and jammy, with its heavy black fruit aromas mixing with vanilla, cigar and tobacco notes. The palate is big and rather boozy, with dark berries and plums walking hand in hand with savory, meaty, black olive flavors. Grenache, Syrah and Bordeaux varieties. How’s that for breaking rules?