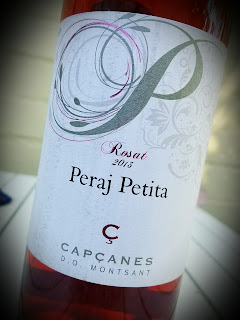 The Spanish wine co-operative of Cellar de Capçanes reportedly made the first kosher wine in Spain. Importers Royal Wine Corporation says that Spanish Jews "were once one of the largest Jewish communities worldwide, living peacefully under both Muslim and Christian rule until the year 1492 when Isabel and Ferdinand expelled them during the inquisition. Currently, there are approximately 40,000 Jews living in Spain."

The 2013 Capçanes Peraj Petita Rosat is a kosher rosé produced in the Montsant region of Spain. The wine is an incredible blend of Garnacha, Tempranillo, Merlot and Syrah grapes. It his only 13% abv on the alcohol scale, which makes it extremely drinkable.

This wine colors up like cranberry juice. It has an extremely earthy and savory element to the nose. It's more than just an herbal "stemminess" - it's a full-on, nose-in-the-furrow dirtfest. There are cherry and strawberry notes, of course, but they live under the ground. The palate plays right along with the game, hiding its bright red fruit underneath an umami blanket. It's not an approach I find much in a rosé, even one that’s Garnacha-based. Nice acidity, and full in the mouth. Pair this with a salami sandwich, cashews or tapas if you're feeling adventurous.