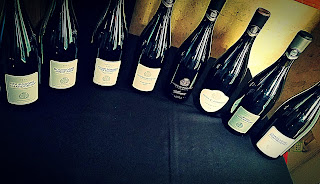 Château de Pommard has been a Burgundy institution for nearly three centuries.  The Micaults, the Marey-Monges and now the Famille Carabello-Baum have all gotten dirty feet and purple hands in the vineyards and cellar of the domaine.

A recent dinner at L.A.'s Katana Robata introduced me to CEO Michael Baum and winemaker Emmanuel Sala, pictured.  Baum's family are the first American owners of a wine-producing château in the Côte d'Or.  They have brought a more open attitude to Burgundy from their California roots. They even had a music festival this summer, Rootstock.  Baum didn’t come to Los Angeles to talk about tunes, though. 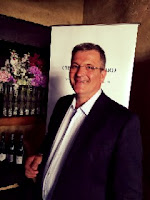 He came to talk about wine, specifically what his part of Burgundy is doing to educate people to the wonders of the region. Baum said Château de Pommard has launched six immersive wine experiences designed to "untangle the web that makes Burgundy the most envied wine region in the world."

He must be a real character in Burgundy. Not only does Baum carry a Silicon Valley pedigree, and looks a little like Bill Mahr, he even speaks highly of Oregon's Willamette Valley Pinot Noirs. As for the guy in the cellar, Sala's 28 years in winemaking has led him to "focus more on soil than wine." Here's what we tasted during the dinner:

Bourgogne Chardonnay 2012 - Peaches and minerals grace the nose, while the palate shows nice heft with citrus and fresh acidity. Made from grapes that came from 25-year-old vines, this blanc aged for 24 months in 15% new oak.

Chassagne-Montrachet Premier Cru 2013 - Softer than the 2012, it pairs better with Asian dishes and shows more earthy qualities than minerals.

Maranges Premier Cru "Les Loyères" 2013 - Medium ruby in color, this one has a gorgeous nose of soft black raspberry and tea. Very soft tannins make for an extremely elegant drink. It's as mellow as it gets, from a challenging vintage. Baum says, "To make beautiful wine, you have to like bad weather." The wine pairs perfectly with tuna carpaccio.

Vivant Micault 2013 - From the oldest vines in the clos, there's black tea ahead of rustic minerals on the nose. A gentle structure is carried forward on the palate by an even stronger note of tea. It's a great pairing with shrimp tempura. 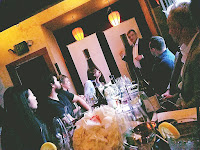 Clos Marey-Monge 2012 - A very earthy nose full of black tea leads to a bit more tannic structure on the palate, but it’s still smooth. Raspberry, mineral and a bit of cola are notable. I found it reminded me somewhat of California Pinot, and it went well with spare ribs and pork belly.

Simone 2013 - More cola notes come around on the nose here with the expected black tea and minerals. The palate showed the biggest of the evening's selections. Muscular, but still elegant. This was paired with the chocolate lava cake at dessert, and pleased the crowd.