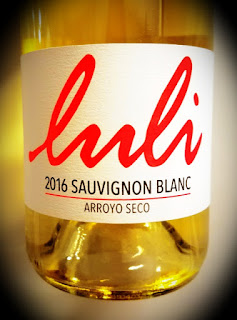 In the same way that rosé gets a seasonal shun when the weather turns brisk, wine lovers sometimes forget about Sauvignon Blanc over the fall and winter.  I admit I'm guilty of letting Sauvignon Blanc fall into that "harbinger of spring" category.  It performs extremely well there, but Sauvignon Blanc also has a place at the holiday table, not just the picnic table.  In the coming weeks we'll be covering some nice choices from the Arroyo Seco AVA of California's Monterey County.

The Arroyo Seco AVA is centered around the Arroyo Seco River.  It's described as a seasonal waterway that brings rain and snowmelt from the Santa Lucia Mountains to the Salinas River.  Commercial grape growing started in 1961 and has grown to some 7,000 acres under vine.  The region is about 40 miles away from the deep waters of Monterey Bay and parts of it get direct exposure to the Pacific Ocean through the Salinas Valley.

Sara Floyd partnered with the Pisoni family to create her line of Luli wines.  The Sauvignon Blanc grapes were grown in Griva Vineyard, a cold, windy, ancient riverbed with soil full of shale.  Winemaker Jeff Pisoni fermented the wine in neutral barrels, not stainless steel, so the mouthfeel is a little weightier than one might expect from a Sauvigon Blanc.  It was selling for about $18, but the winery lists it as "sold out."  That's no surprise.  Alcohol is a middling 14.2% abv.

This wine's nose offers up more of that wonderful grassy aroma than I usually find in California SauvBlancs.  There's a touch of orange peel and lemon zest in there, too.  The mouthfeel is medium full and graced with a zippy acidity.  There is a rich minerality here, as expected, with tropical fruit flavors trying their best to overshadow the stark rocks.  The rocks win.  Lay out an olive and cheese plate if you don't have any shellfish lying about.