Cabernet From The Warm Heart Of Calistoga 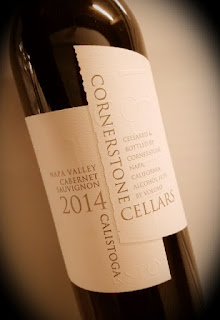 The wines of Cornerstone Cellars have been around for nearly three decades, and the company has seen its share of change through the years.  One thing that appears to have stayed the same is their commitment to crafting excellent Cabernet Sauvignon wines in Napa Valley.  The recently added winemakers in Yountville, Charles Thomas and Kari Auringer, are guiding the good ship Cabernet now at Cornerstone.  Thomas has a 30 year track record in the Napa Valley, and Auringer is in her second go-round with the winery.

The Cornerstone 2014 Calistoga Cab shows off what it's all about in Calistoga - ripe fruit and a whole bunch of it.  Calistoga is the warmest place in the Napa Valley appellation, so there’s enough opportunity for the grapes to become sweet and juicy.  The 100% Cabernet Sauvignon grapes are fermented and aged in French oak, 70% of which was new.  Despite all that new wood, the fruit controls this wine from sniff to sip.  The wine hits an alcohol mark of 14.5% abv and sells for $75.

This wine is dark and deep, and smells that way.  Blackberry, black cherry and plum dominate the nose.  There's only a hint of wood influence - unusual for Napa Cabs - with barely noticeable traces of cedar and spice, almost no graphite.  On the palate, it's a smooth ride with gently firm tannins, if that makes any sense.  The flavors are as fruity as the nose, but they are just as dark.  The wine finishes long and leaves dark fruit and licorice as a calling card.